For years, and even decades (oh boy…) I have spent time at Montgomery Mall in Bethesda, MD, that it will always be a part of my childhood, a part of my youth, and a part of something that I don’t always think about when I’m in the vicinity.

However, earlier this week I was back again and the reasons don’t matter.  I was just there.  No, not that bad kind of there where you just exist and you’re mediocre, or average.  I’m talking about a place in time where everything felt ok.  I was one with the universe and the universe was on with me.  It’s one with you too.

Many shopping centers, malls, strip malls, and the like have gone through necessary renovations to keep up with the times and evolution.  It’s that progress and that sometimes gives the illusion of well, progress.  It’s that more things change, the more they stay constant and maybe even, just there.

Something told me to go to this place where I spent many times ‘hanging out’ (aka sitting around doing nothing) and being a kid.  I still feel like a kid at times.  And being a kid means…

That food court has evolved while everything else around it looked the same.  In a way, I like that.  It’s the old sentimental in me.  I’m good with change (sometimes, that’s my own issues at play) but I find such endearing charm in things looking like they will always be the same.  This is a mall I’m talking about mind you, yes I could be referring to anything, maybe I am.

I liked what the food court has become.  You have your staples, you have your local food operations, and you have some places I had never heard of. 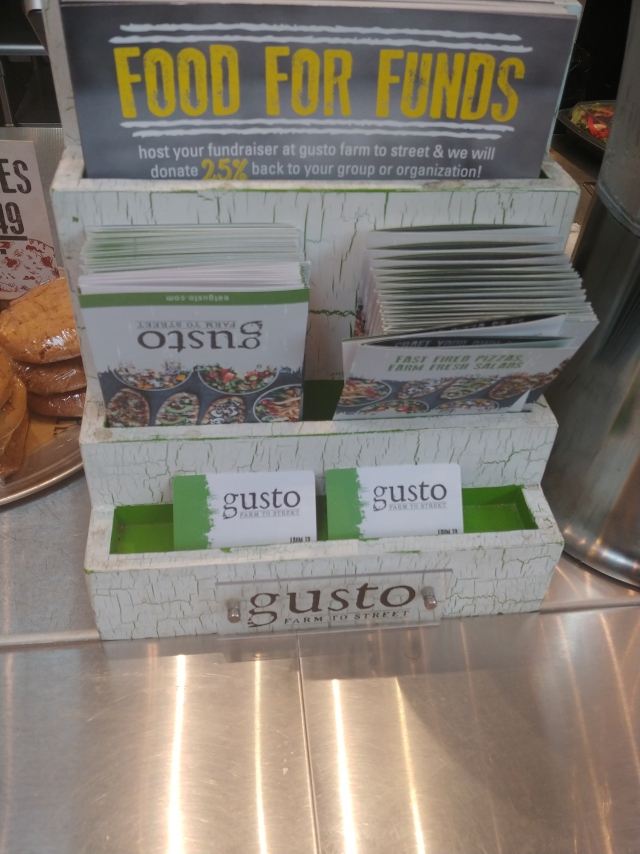 That brings us to Gusto (here are their locations, their story, and of course the food), which makes all their food with love, and the farm fresh ingredients that we’ve grown accustomed or at least are becoming more aware of.

Because of the location, fast is the name of the game, and I went with two pies and got  creative with the differences. 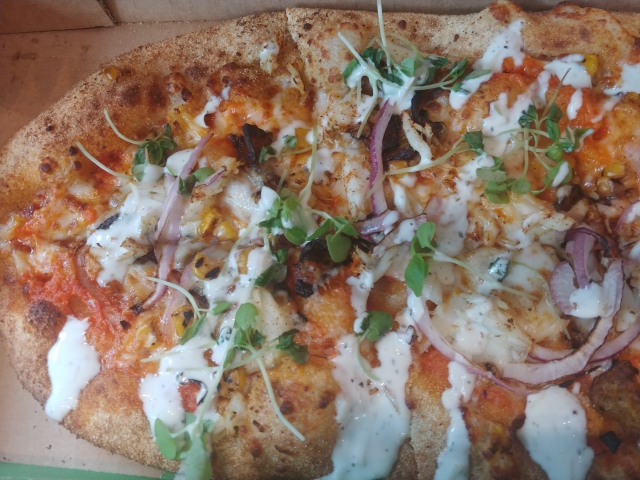 First is their current season item, the Obey The Claw.

I’m not going to explain how I thought about everything on this pie, that would be too much.  There’s so much going on here, and I would be lying if I told you I could taste everything.  Yet, nothing is too in your face or crammed down your throat.

The crab meat itself is tasty, and the various vegetables all look so beautiful, yet everything feels like they complement the other. It’s understated in a way that I didn’t expect.  Maybe that’s the point.  The thin whole grain crust is a a nice touch.  I really enjoyed this thing and took my time, never felt full, and felt good. 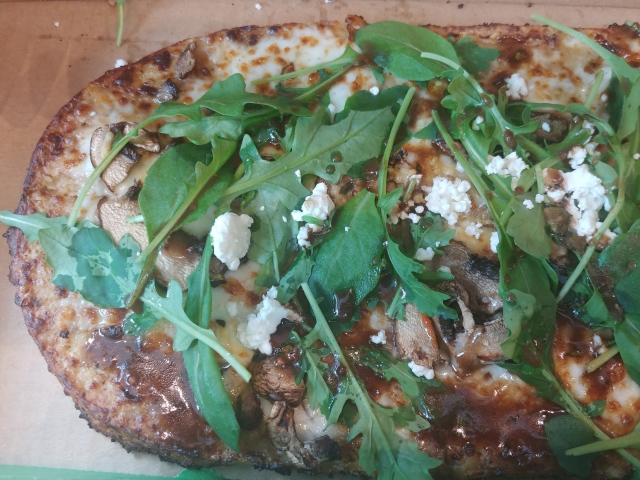 You may have heard about cauliflower based pizza crusts becoming more predominant, as we continue to look for ways to eat right and more health conscious.   For the Wild Shroom pizza I went said crust and it was different, it was distinct, and at the same time it felt satisfying. 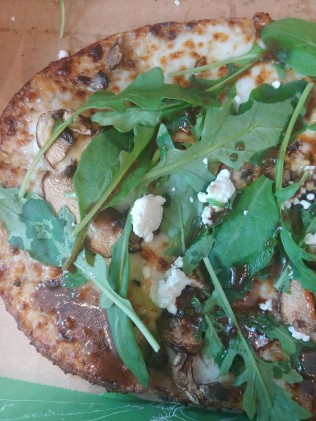 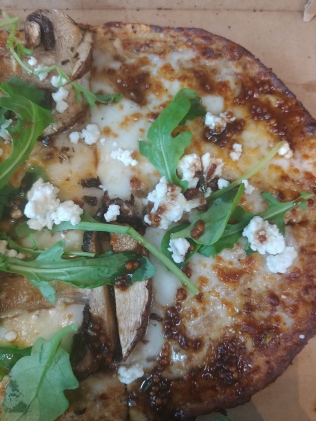 There’s an art to heating a crust, and there’s an art to a lot of things.  I’ve had cauliflower crusts before but in such small doses, that I can’t compare one to the other.  All I can say here is that it worked with the mushrooms, arugula, and goat cheese.  I don’t know if the crust could have been heated differently or this is how it was supposed to be.  But no need to quibble, I had fun.   For a couple extra dollars, this was a fun experience. 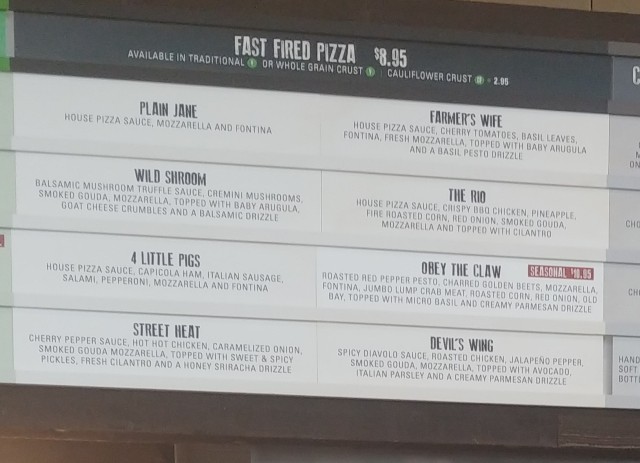 At $9 a pie ($2 extra for cauliflower and gluten free) it may feel pricey, but I understand with the location and what we’re supporting.  I’m all for supporting it and I highly recommend a trip to Gusto if there’s one near you. 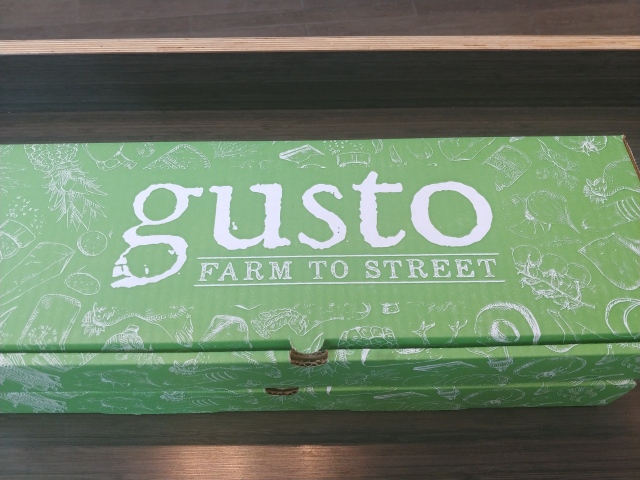 You can just sense that more stores are coming and we’re going to be hearing and seeing a lot more from them.

Peace Be With You 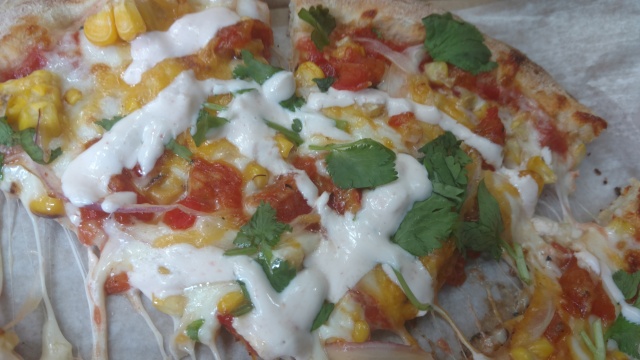 That’s because it didn’t quite meet my hopeless romantically like expectations.   I really wanted to like this, to the point that I was genuinely despondent that I didn’t.   And per the recommendation of the cook I went with it. 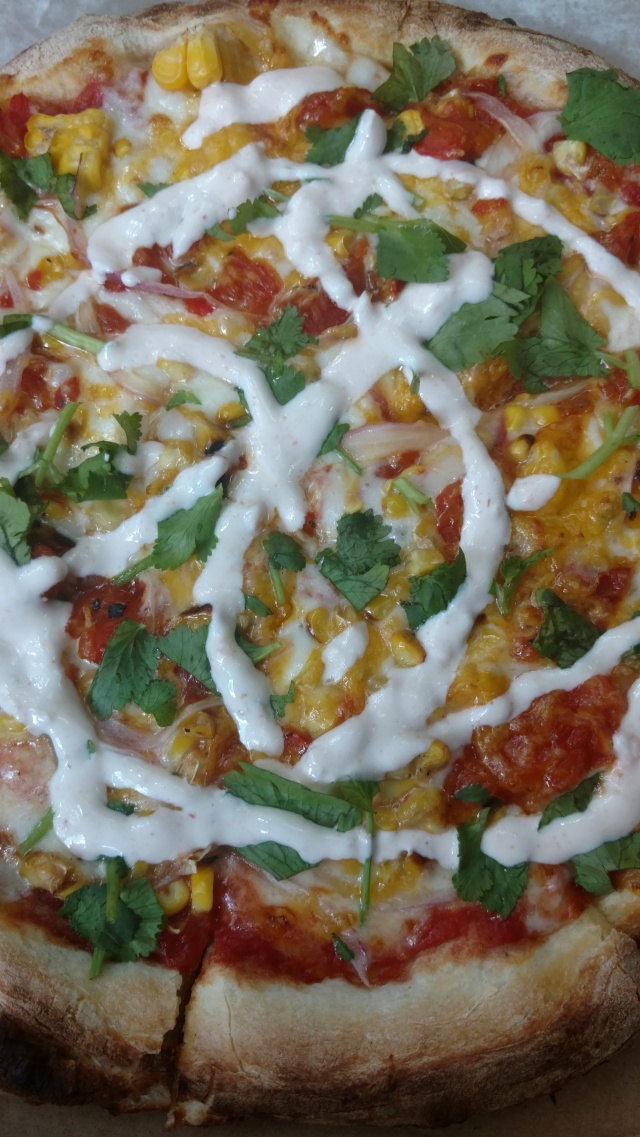 You see Deb’s Veggie changes monthly with fresh peak season veggies.  I was here in mid-June and assumed that this would be a perfect time as any to try some magnificent vegetables on a thin crust.

The crust was really good but maybe just bit overcooked and then undercooked in parts.  I hope that makes sense.  Aside from that I don’t know what happened exactly. 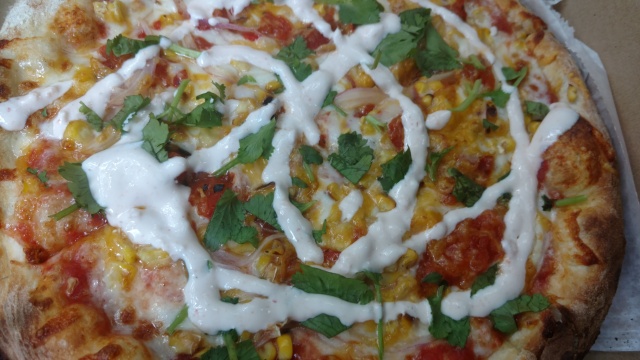 The vegetables included corn, peppers, tomatoes, and topped with parsley.  I think.  If I’m wrong I’ll stand corrected.   On paper and visually this is art.  Look at that pizza.  This is masterfully created.  And topped with that aioli usually means a winner.  This is one the most gorgeous looking pies I’ve seen in sometime, I just wish it translated the same when eaten.   Individually the toppings were great, but as a whole it didn’t register as anything but a pie that I tried to eat and then I forgot about it.  But I didn’t forget about it enough not to write about it. 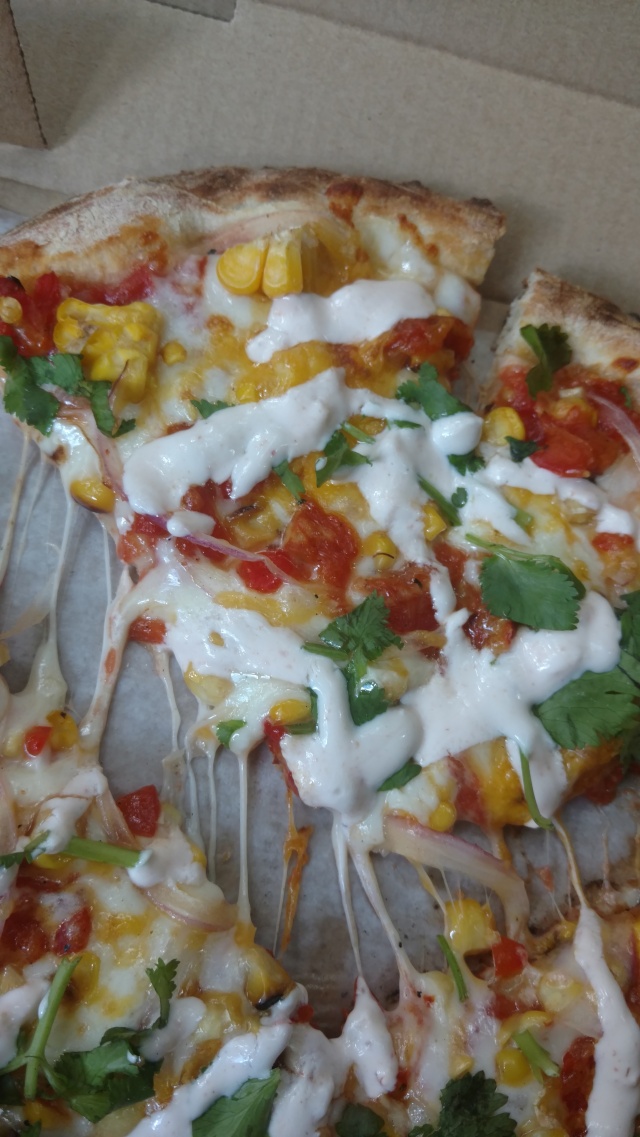 That’s because this pizzeria was introduced to me by a dear friend.  I appreciate when friends send me links and videos of pizza suggestions and reasons to get excited.  And believe me St. Pete has given me many reasons to be excited.  I was was nostalgic before I even arrived, and even more so as nearly a month now as passed.

Yet there’s so much to love about this place, and the space.  The space is small.  There’s a few tables for dining in but this place encourages carry out and dining outside behavior. Whether that’s just an assumption or presumption by me is what it is.  But the weather here always seems to be gorgeous and there’s so much to do outside.  Being indoors for too long just seems to defeat the purpose of all this.  Again, it’s just an observation but it’s what I well, observed.

In addition, all they serve is pizza.  I find that so endearing,  It’s a true pizza joint.  And I’ll stand corrected on this one, technically they do serve a few side items, but you’ll notice those items all go on their signature pizzas. 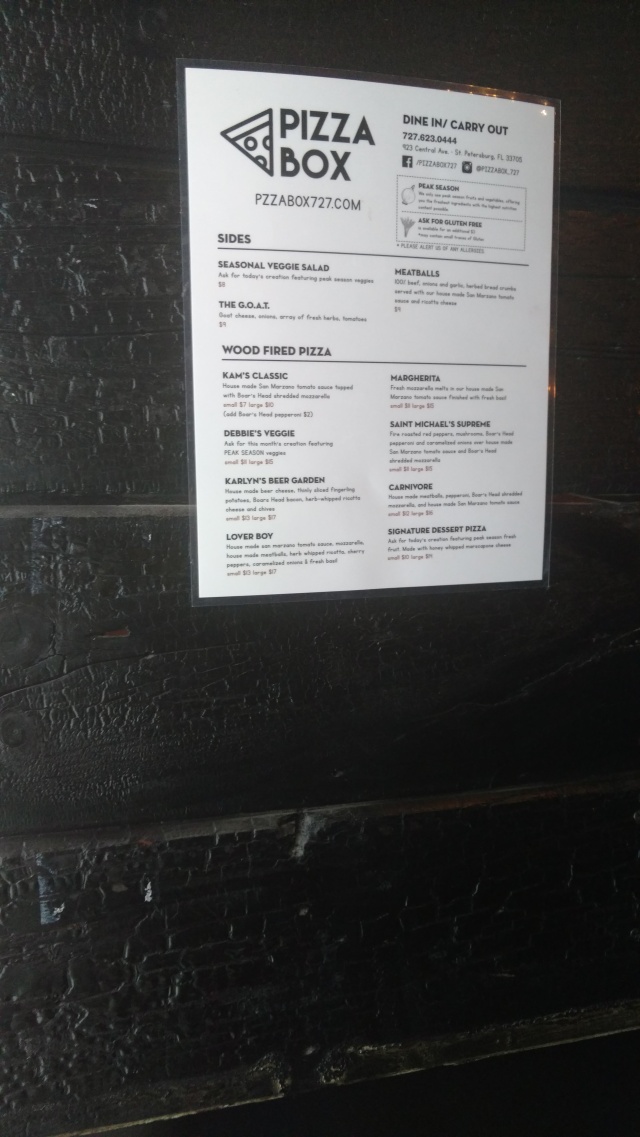 And a signature pizza is what I will try again next time.  There’s so many beautiful options that I may just chalk this one up to a misstep and nothing else.   I just liked the idea of not knowing what was going on my pie.  It’s the joys of being on vacation, on holiday, and on an adventure.   And even though the pizza wasn’t up to par this time, I’m confident that the next time (and there will be a next time) will be a success.

As much as I felt like a tourist (not really) I did feel at home too.  I got used to this real quick.  The laid back approach of everything surrounding this place and this town makes me so happy. 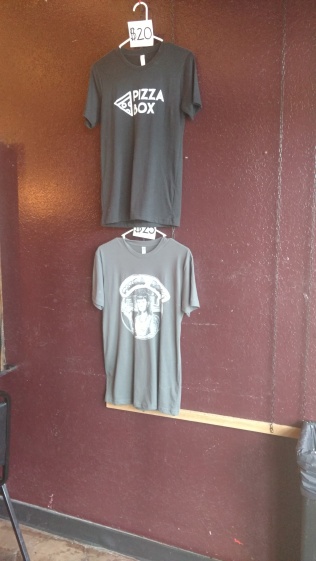 Moral of the story, I will be visiting again soon and a return to Pizza Box  is on the agenda.  Even though the best vacations are with no itinerary and no agenda, this’ll still be near the top of the list, that doesn’t exist.