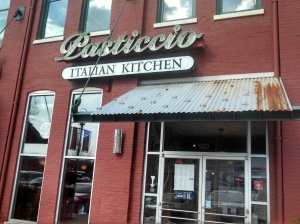 There’s a lot of places we go to, because we like it, love it, out of necessity, or out of habit.  And then there’s you don’t even know exist or unintentionally take for granted.   Many of us drive by such locales to and from work everyday.

Pasticcio, in the Can Company part of Canton, might be one of those places.    Until a few years ago, I didn’t know it existed either.    But they have some mighty good slices.   They also have a full menu and a stocked bar, which is set up nicely to the side.

In the half dozen or so times I’ve been in, I’ve always felt a good energy and a good welcoming aura walking in.   The staff has always been friendly, and that’s an understatement.

One of the charms of this place, unintentional or not, by the pizza trays, is there his no signage describing which each pizza is.  So I always find myself asking one of the team members each time what certain pies area.     Always fun.  In turn, their online menu seems limited but in person it’s anything but.   They change their specials daily, and even the big ing.board with their specials list doesn’t feel intimidating.

All I’ve had their are slices, but next time, I would love to get something else.  It all looks so beautiful.

I usually do types of pies, but I was in a great mood, so let’s do another! 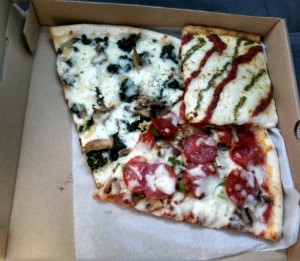 The pictures above don’t do this justice.

As I mentioned, the descriptions were not available, so I am going to describe each one, based on what this amazing person told me.

Going clockwise, we have Grandma’s Slice, which is squared shape and with a thicker crust.   And I could taste something  different about it, I just can’t put my finger on what it is.  Maybe it’s left to be mysterious and under the radar.  Seems to be a common theme throughout.  The yummy pesto and marinara are layered over the cheese and that’s it. Simple. Awesome. Delicious.

Next down the line is, the Deluxe, with pepperoni, mushrooms, onions, and peppers.   And I don’t usually eat pepperoni slices, not out of spite, just because it’s not one of my preferred toppings.  But this was wonderful as well.   Everything was baked into the cheese perfectly.  And the thin crust is just as great as the aforementioned Grandma’s slice.

The white pizza, with ricotta, spinach, and mushrooms was next.  This was good, but my least favorite of the three.  I feel maybe since I tried the other two first, that my palate may have been thrown off a bit.   And I’ve also had some amazing whites.   You don’t often see mushrooms added to a white pie, so I loved that very much.

All in all, this was a rousing success, and I like the fact that this is readily available to us, in a wonderful part of town.   This is not something to be taken for granted. 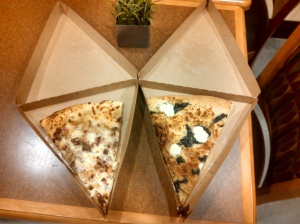 Or maybe a place for pals, if that’s more to your liking.  I sure do love Wegmans.   I think I visited my first one, when it opened up in Hunt Valley, MD about 10 years ago.  Originating nearly 100 years ago from Rochester, New York, they are growing in popularity and locations.   If you’ve been inside, you know it’s like the Disney World of food stores.  But, It’s more than just that.  It’s a place of joy, inspiration, and happiness.  And of course it’s a place where plenty of wonderful things can be purchased.   Let me not get too carried away here.  The heck with it, let’s have fun. It’s time to evoke emotions.

Anything you want to go, is here; from sandwiches, sushi, salad, soup and of course the hot bar with international foods from all over this wonderful planet.  But this is a pizza blog.  Time to make moves.

I must say, I love their cheese, white, and pepperoni pizza.  Perhaps in the future I will review those.  I will just say they are great.   And there will be more posts regarding Wegmans pies soon.

The specific store I visited for this installment was at Boulevard At Box Hill in Abingdon, MD.

This post will be about the Chef’s Creations, and they are constantly changing :

Slice #1 : The Bacon Cheese Blue Cheeseburger (pictured at the top of this post, on the left) : Oh my goodness.  This was heavenly.   I find their pizza dough to be exquisite.  It’s cooked in their ovens to perfection.  It wasn’t too crunchy nor too soft either.  It tasted like I was eating a naan or pita bread.  And that’s how their dough has resonated with me.  And the mozzarella and blue cheese melted together, with the bacon and hamburger meat is an incredible combination.   Phenomenal stuff.

Slice #2 : The Spinach Ricotta (pictured on the right) : Well something went wrong here.   I could tell it was siting on the tray for a while, as it was starting to look a bit old.  The pizza tasted great, but the crust was too crunchy.  The ingredients were great but needn’t have been out this long. I won’t fault the store, but I will fault time.  It just felt like eating potato chips.

But this will not discourage me from coming back.  In my opinion, they have some underrated pizza.  Maybe because it’s a grocery store and not a specific place to get an amazing slice or pie.  I will be returning and hope to bring another inspirational take on the Wegmans experience.  And with more pictures. 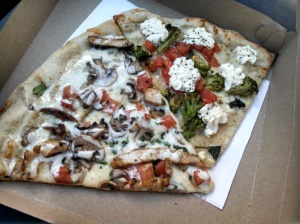 There is something charming about this neighborhood pizza place, nestled in a cozy location, in the nooks and crannies of Canton.  Giovanni’s Tutti Gusti has a great staff and equally amazing energy, which adds to the soul and the heart of their food. They always greet their patrons like one of their own.   It’s the little things that are the big things.

Many of my friends who a residents of Canton, Brewers Hill, and Highlandtown; have given mainly glowing reviews of their pies.   It took me way too get here.   I drove by this establishment countless of times, never to pay it any mind.  Shame on me. Their slices have never disappointed and are noticeably cheaper compared to the competition.

The two slices I purchased today (which are pictured above), were the Chicken Ranch and the Pizza Bianca (White Pizza). Both were heavenly.

The Chicken Ranch is habit forming.  To begin, the ranch sauce is out of this world.  I don’t know if there’s any hidden ingredients, but my goodness.  It can’t be put into words how good this tastes.    It’s topped with grilled chicken, that tastes like real grilled chicken; mushrooms, tomatoes, and what looks to be basil.  Nothing gets lost in the shuffle here.  This might be my favorite pizza from here.    This slice never had a chance.

The White Pizza tastes wondrous as well.   It’s a simple concoction of ricotta, mozzarella, broccoli, and tomatoes.    I am really like the way vegetables tastes on pizza right now.  It’s what my taste buds are feeling at the moment.

One more thing, the way the crust is prepared is insane.  It is a perfectly cooked thin crust.  I would like to know where this dough is from or if it’s made in house.   I detect an ever so slight buttery taste to the crust as well.  Or that could just be the Ranch sauce.

I have only been here a handful of times and I will be back soon.  I am asking these questions, well, because I am still fairly new to Tutti Gusti’s and I am here inspiring pizza research.

I strongly recommend this place.  Their pizza is delicioso and there’s a magnificent aura from within.  On the few occasions I have visited, I have seen all types of folks from what walks of life in here; from police, firefighters, business people, students, locals, and everyone in between.    No matter what we do, in the end, we all want some good pizza to eat and something fun to talk about.  For that, and many other reasons, we are all the same.  And we’re in this thing together.