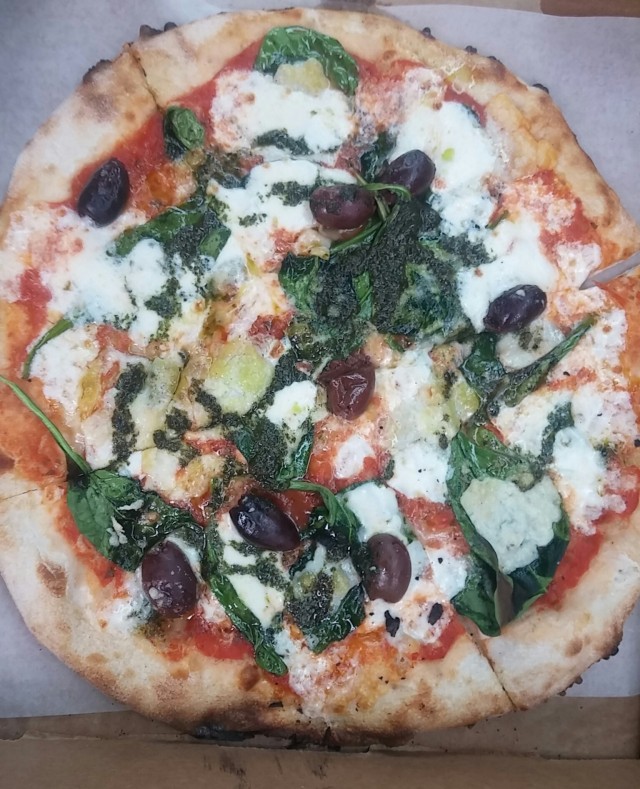 I don’t go to Washington, DC enough.   It has rapidly changed and I barely recognize certain neighborhoods.  The transformation in the last 15 years is something that a lot of major cities seem to be going through, but I never expected it be like this.

I used to go to Eastern Market with my family a lot when I was a kid.  The surrounding area may not have been the safest but that didn’t seem to bother anyone.

Now nothing could be further from the truth.  The area is flourishing with overpriced homes, nice shoppes, restaurants, businesses, and a plenty of places to sight see.

For reasons that never need to make sense or explain themselves, I found myself in DC and Eastern Market last week.

I had forgotten what the inside looked like and I was hoping, to no avail, to find a pizzeria inside to write about.

What’s fun is no matter where you are and there’s nearby places to eat, you will find pizza.  I found pizza.

Literally steps away is Seventh Hill. 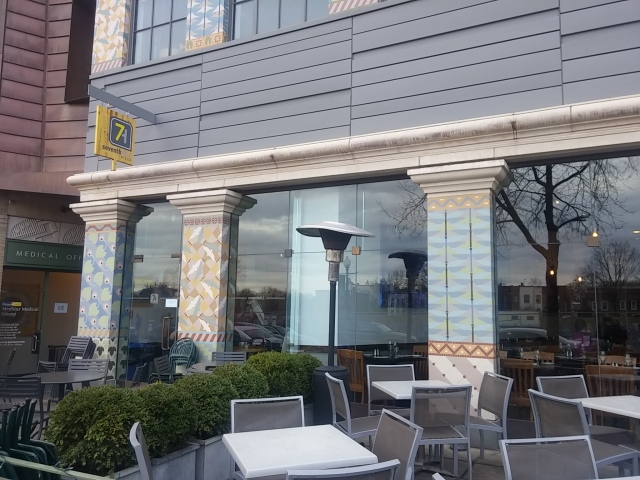 Nothing stood out about the place.   There were pizza peels adorning the walls and a small dining area and bar inside.   The outdoor area may actually seat more.  And on this late December day, it was still warm enough that the furniture was still out.

The menu is very creative which lists various neighborhoods, landmarks, and famous streets of our Nation’s Capital.

I avoided the obvious and didn’t get the Eastern Market.  I went with the top of the choices and ordered the Pennsylvania Avenue.

I regret that decision now.

It’s not that the pizza was horrific.  It just felt bland.   The wood-fired crust was fine.  I just didn’t sense any inspiration behind it, even with one of my favorites, pesto.

However, the pecorino cheese was a nice complement to the mozzarella but I just wanted a little something more.  The olives and spinach tasted fresh.  And I didn’t mind if pieces of either fell off and I could enjoy them individually.   It just didn’t blow me away.

It’s a safe pie that wouldn’t offend anyone and most would like.   I can imagine a lot of their other pies would have more to offer.  Maybe I’m irritated I went with a safer route.   At least the pie named after it’s location has goat  cheese.  And that would be different.   Like I’ve reiterated before, all this means is that I will give it another go.

In the meantime, I posted some pictures of the market and the architecture outside. This brings back a few memories but at the same time I don’t remember this place.   It’s a bit numbing in a way.   I feel so detached.

And that’s what many parts of the D.C. area have become.  It’s just so divergent and conflicting in so many ways.   But I will be doing more DC area, and within the city proper itself.

Don’t let the title fool you. I just love alliteration. But, I did not love this weeks selections from Pizza Autentica. And I actually had this on a Monday.

A little road trip led me to the College Park, MD location, not far from the campus of the University of Maryland.   I haven’t lived in the Washington, DC area in nearly 7 years, so I wasn’t aware this restaurant existed, or that they had 8 locations.

This wasn’t a good first impression.  The location seemed cookie cutter and boring.  I didn’t have a good feeling from the moment I walked in.  And the pizza I tried represented that.

Looks pretty doesn’t it?  Well looks can be deceiving.   I had the Hawaiian first.  And I love ham and pineapple.  But this was disappointing,  The tomato sauce tasted funny.  I can’t describe it exactly.  Perhaps bland is the apropos term.  The ham and pineapple didn’t taste fresh.  And it was just thrown on top of a cheese slice.  The mozzarella didn’t taste much better, so I know how weak their cheese is too.  Nothing about this was authentic.  It just seemed like a slice thrown together with leftovers, near or past their expiration date.

Next, was the white pie, with tomatoes, basil, and ricotta.   This was a little better, but not by much.

In addition, the crusts for both didn’t seem cooked right.  I don’t ask for much.  I just want a pie, or slice, along with the crust to taste good.  This was neither the right way a pie should be toasted nor how it crunches.  It wasn’t the worst I’ve had, by any means, but both choices, seemed lifeless and mediocre.

A fun thing about blogging, or many cool things in life for that matter, is that it can lead you to unexpected and unplanned destinations. In some ways, I am glad that this was my first review of a spot in the Washington, DC area.  I know not every pizza place is going to bring about a positive experience.  Hopefully it’ll get better from here.