I had all these titles in mind, and nothing stood out.  It all seemed forced.  It all seems, well, suited for another time.   In a way I’m working backwards and forwards, and it’s a continuation of something I spoke of two weeks ago.

There’s going to be a point where my love for Annapolis (and my love affair can be found here) is going to sound repetitive, and all the phrases and connotations are going feel trite.  I’m hoping I’m nowhere close to that point.  Because this is a good one.

This was an interesting day, that takes me a few weeks ago, to where I was in a vulnerable and confused place.  I was in a state of shock and numbness that I had never felt before.  It was a sense of relief, peace, and forthcoming (still waiting…) rejuvenation.  Maybe.

When I’m feeling the blues or anything uncomfortable, the natural inclination is to hide under whatever I can for as long as I need to, as in a way to stamp out that feeling.  That works every once in a while.  That feeling is going to be there, so why not make the most of things.

So I got in the car and just went with a sense I would head to Naptown, literally to buy some tea and maybe get some fresh air.

That did happen, but who knew this would become a marathon like afternoon that turned into evening, that I will always remember with every emotion ever created.  Even if I never wrote about this particular day, it’s going to stick with me.

Some things age well and resonate with you because the memories are amazing.  This one tells a story that I’m torn on now, but it got better as I say I’m torn, and it’s becoming the night out of all nights out that I’ll look back so fondly on.

And it was all on my own.

I’ll leave a lot of the places out, because I’ll revisit those another day.  But I did a lot of wandering, and discovered some unfamiliar places that may be considered home sometime.   It’s good to go to places where you feel like you belong.  That’s what most of us are wanting. Yet, that belonging first comes from within.

Annapolis has that aura about it.  If you hang around long enough (and maybe not even that long) you’re going to know everyone and they’re going to know you.  That’s a powerful thing, can be a dangerous thing, but can be the most beautiful thing.

In the back of my mind, I’m aware that news travels fast, and that people talk…

It’s a place I always called home.  And I have several fond family memories of our state capital, going back to childhood.   More come to mind as I write this.

While I’ve made so many new ones with so many new amazing friends, and people I consider family.  This one is just for me.  And anyone who reads this. 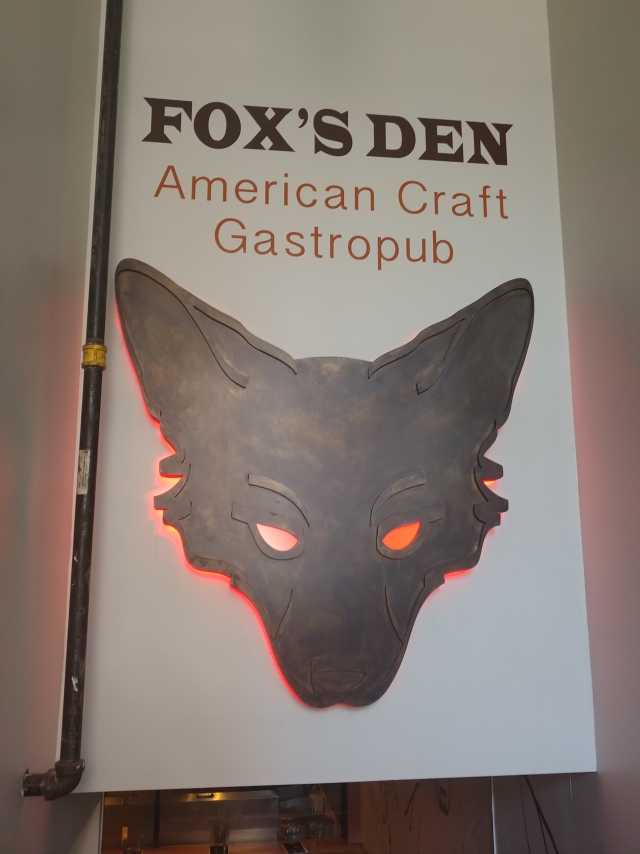 Fox’s Den is what I thought was a hidden gem in the heart of Main Street.  Well there’s a lot of hearts of Main, but that should go without saying.

Back in January, I was all set to do a review of a wine and pizza experience here, but it was packed with state officials, and instead of faking it till we made it, we were shown the door.   A few days later, it was a typical crowded happy hour, but it didn’t feel right.  Not even close.

Four months later, it took a life changing experience, an unplanned (sort of) drive, and the universe rearranging itself to present me with a magnificent pizza, wine, and personal experience that is too good not to share, or too good to share.  Either one applies, but I’m happy to continue…

It was an early afternoon Thursday, before the long holiday weekend, so it was quiet.  And quiet is good.  Those steps that lead to this basement bar exciting.  I felt like I was on a runway and that fox at the top has all eyes on you and I.  No need to get over yourself, it’s looking…

I was told the pizza here is fabulous, and it absolutely is (here is their menu,their story, and contact information); it had the most comforting wood-fired crust, that remind me of many meals with family.  It had a familiarity that I’m sure many of us can relate to.

In reading what the owners and management had in mind, a family and locally oriented kind of vibe is always welcome, and you can never have enough of it

I ordered a half pepperoni & pepperoncini, and half cheese.   I figured basics was first, before I went any further.  Those piece of pepperoni are absolutely divine.  What else is there to say?  This is a pizza eaters pizza. 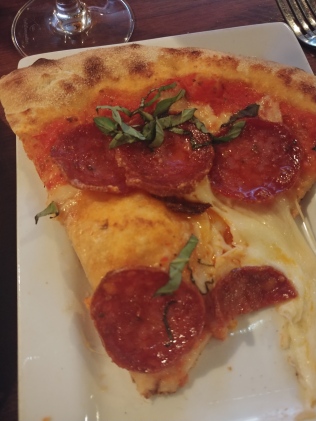 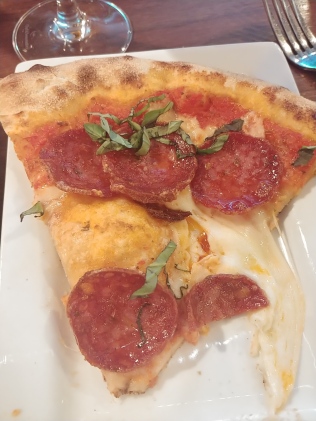 When I was told what pies to get, this was one of the stronger recommendations from dear friends who have visited, and from Ryan who was working behind the bar, who has a big help and could not be more hospitable.  Thanks so much.

The pie worked perfectly with the wine I chose.  I forgot the grape, but it doesn’t matter.  None of the details matter. 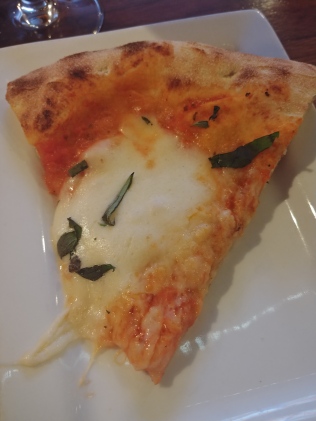 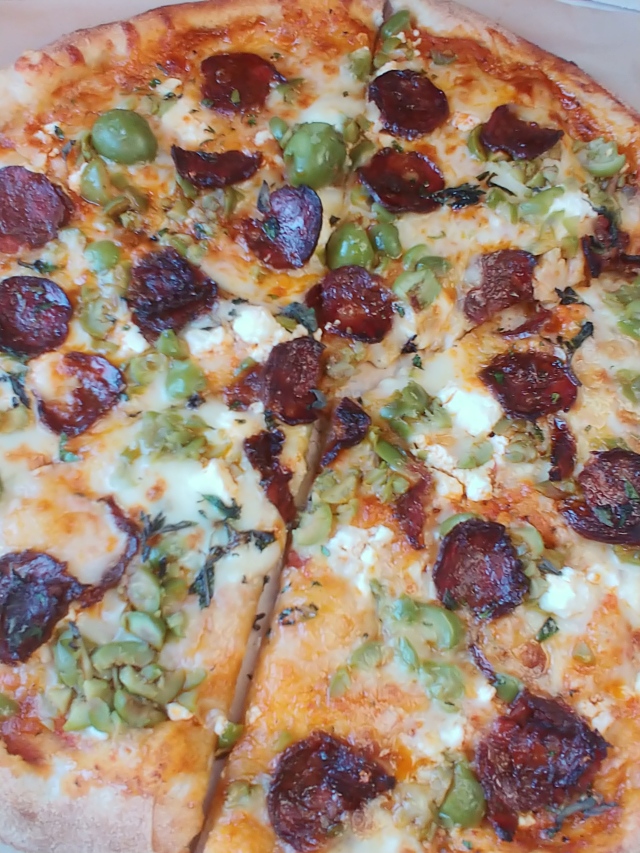 To go, Ryan suggested the El Matador, and it’s another gem.  The chorizo, feta, provolone, olives, and honey combination sounds like a lot, but the medley works beyond belief and beyond comprehension.   And that dough, my goodness.  This is one of the best heated pizzas I can ever remember. 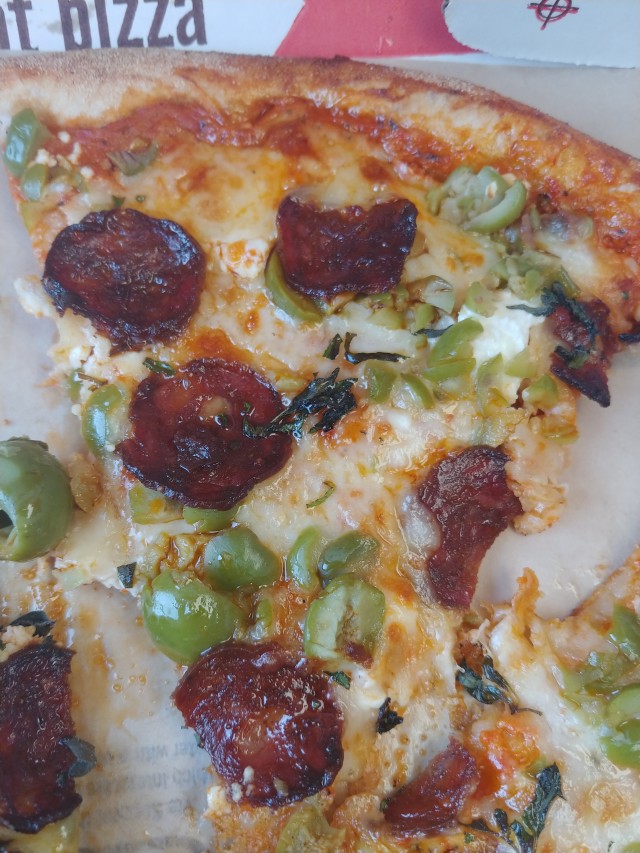 I almost write this in a way that takes away from the pizza.  This day was about a lot of things, and a lot of emotions.   I felt like I was carrying the weight of the universe, but the universe carried me and protected me from what I was feeling.

The amount of walking and thinking I did along this beautiful town, through the historic streets, the majestic buildings and colonial architecture hopefully burned off all this yummy food.  But it didn’t matter.  It’s a day that even as I write this, can’t be completely captured in words.

I’m glad I got this in before this coming Father’s Day.   I only realize this now, as I took a couple of weeks off to relax, find peace, and well keep trying to find peace.

This town, officially felt like my town, but that wasn’t the intent.  I was born in one place, that’s also home, but this to me made it official.   Annapolis has always had my heart, but this experience was beyond romantic.  It’s on that kindred spirit level. 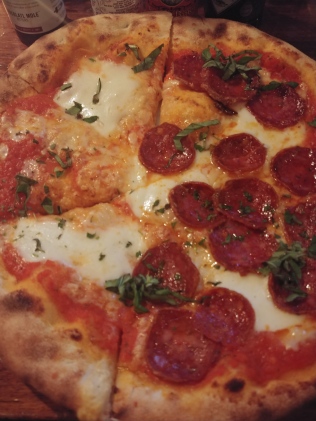 I don’t know where we go from here…

I just don’t know, but I know someone out there, a spirit bigger than me, and bigger than us, is telling me everything is going to be ok.

It’s going to be ok…