I’m just going to go with it.  The best plans and situations, are the ones that are anything but well, planned.

How I ended up in historic Ellicott City yesterday is just one of those things that needs no explanation.  But I’ll explain a little something…

To trust in the universe is something I often take for granted or don’t think about.  Tha’s essentially the same thing.  But if you get in your car and start moving forward, you have to trust that where you end up, is where you’re supposed to be going.  Everything in between is that awesome unknown.   Well sometimes you know where you’re going, I just want to be melodramatic here.

Sometimes plans alter, directions change, and you end up in a charming town like Historic Ellicott City.  And you’re not getting any complaints from me.

I was in the mood for well, what that is I don’t know.   Coffee, tea, breakfast, lunch, and everything in between, and in, out, and through the source, was on my mind.   But I sensed something different today.   The sun was finally out, and my mood was up.  All you need is a little daylight to inspire you, and get that spring (ha) in your step.

From where I parked on Main Street was a sign for a cafe that I swear I never noticed before.  But truthfully, this might have been my first time this calendar year back in one of my favorite places.   When I see a sign for tea, coffee, and other fun things I’m immediately drawn.

So with that I present to you Syriana Cafe & Gallery.

While the website is still on its way, here’s one of their pages for information.

I had no idea what to expect.  I honestly thought I was going to get some coffee to go and be on my merry way.  Instead, I noticed an endearing selection of teas (more on that in that here), and a menu that truly stood out.

Breakfast Thyme Pizza was the first thing that popped out, of course, why wouldn’t it?   I got that along with my tea, and from that point I walked around the multi level cafe and gallery while my food was being prepped. 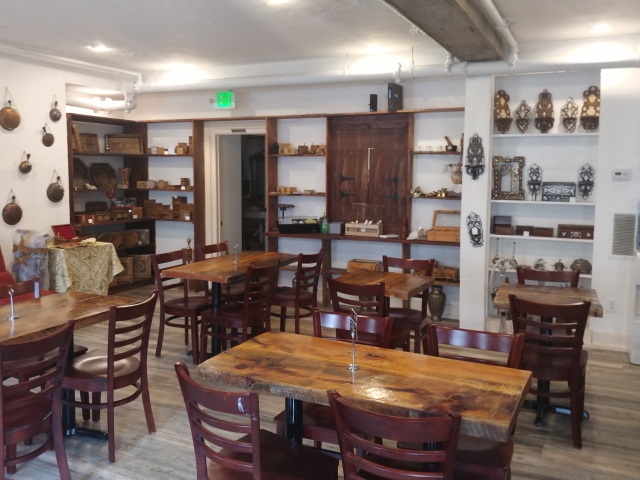 And all I saw was art.  It was splendid, captivating, and made feel like life is going to be ok.   And that’s not all that was ok…

This is my first time ever writing about a breakfast pizza, and it was terrific.  I’m grateful this is the first.  And you can tell it was made with a soul and spirit that you’re only going to find at a local business.   But this had a little something else going for it.  What that is I can’t explain.  Again, sometimes it’s bigger than any of us and no words can do it the proper justice.  I’m just doing my best here. 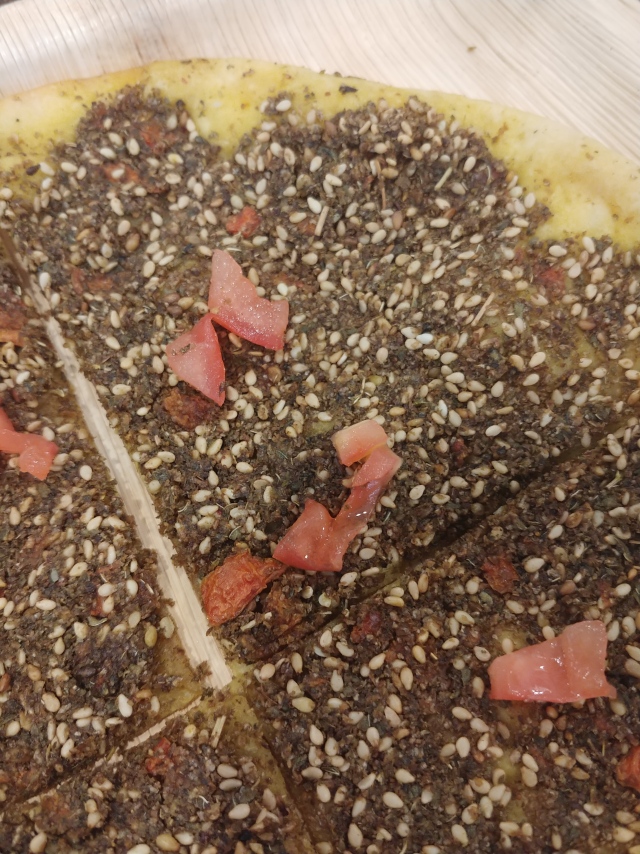 Heated on a magnificent naan bread and topped with thyme, sesame seeds, sumac, and who knows what other amazing spices, this is not your ordinary pizza.  And why would it be?

My pizza and along with much of the menu is inspired by food and drink from the owner’s native Syria.  As a bonus I got to meet Majd, and had the most spirited conversation that I’ve had in quite some time.   It could have gone on all day, but that will resume at another time.

But I can’t recommend this place enough.  It’s been open since December, and the timing of all this is so fascinating.  I made my first ever visit yesterday.  They’re grand opening is this Saturday, April 14th (information can be found here), and there’s much to look forward to. 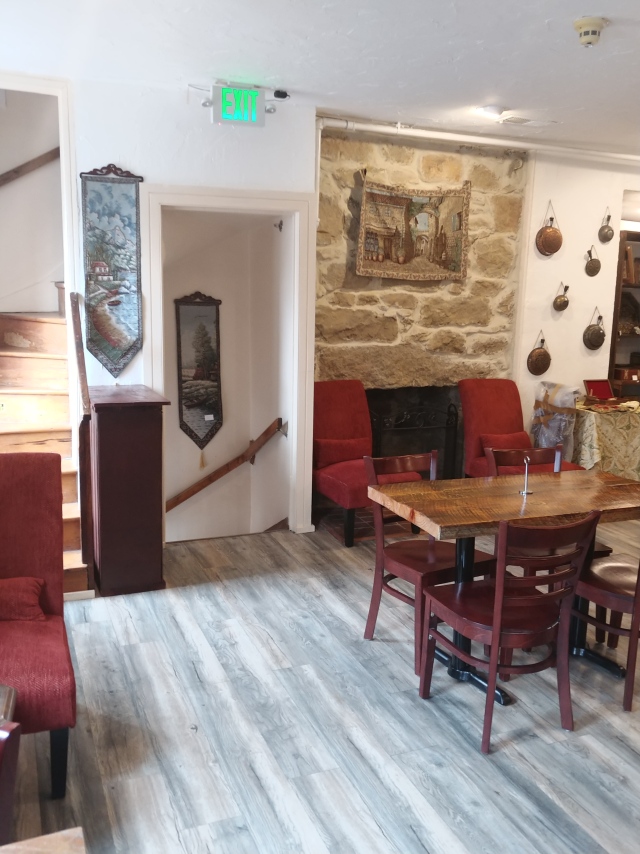 Syriana Cafe is a tremendous addition to a neighborhood going through lot of changes, while still maintaining the integrity of supporting local business with hopefully the same sense of community that created such a picturesque town to begin with.

This also leads in to SpringFest on April 21st.

I’ll have more to say on Tuesday.

2 thoughts on “First Thyme For Everything”