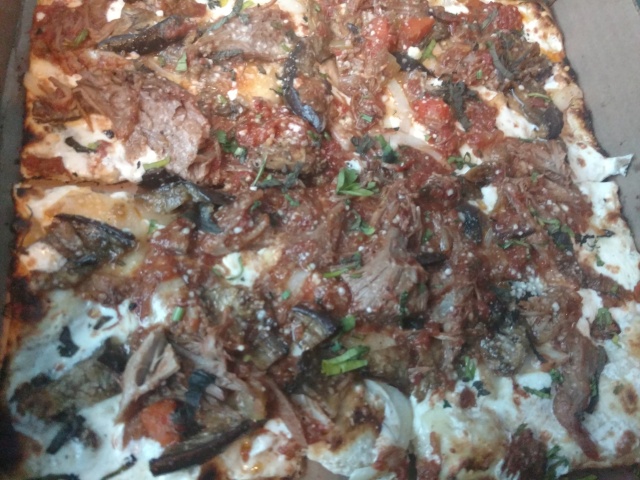 There’s quite a few instances where I could have done a pizzeria more justice.  There’s times where I either know was too harsh on a place, not hard enough, or too kind.  But more importantly is the overall energy levels that surround said pizza place.  And that also applies to me.  I have to be in the best mood possible.  Yet I must go in unbiased and treat everything with equal importance, equal respect, and equal praise and criticisms.

Of course I have favorites.  Some I’ve written about, and some that are yet to come.   And believe me, more is coming…

And with that I present to you, an oldie but a goodie, but not quite an oldie, Joe Squared in the Station North neighborhood in Baltimore.  This is the Artscape special for this year,2017 edition, which is becoming a fun little tradition (here’s the last two years of posts related to this awesome festival) that I’ve grown to become fond of.   And Joe Squared will be right in the vicinity of all the activity this weekend.

They moved locations not too long ago.   Their original location footsteps away from their new locale had a charm to it.  It felt Baltimore, it felt old world, and it just didn’t feel like how many newish places are looking and feeling today.  It had an authenticity, which still exists in many places, but is slowly dissipating.

However, I never had their pizza in the old spot.  I only grabbed a drink and maybe an appetizer from time to time.  I wasn’t there enough to consider myself a regular.  Not even close.  But I did feel at home and felt cozy when I was there.

Several year later, my first pizza eating experience at Joe’s was actually at their (at the time) second location at PowerPlant Live.

It’s where friends and I would prefer to eat before a concert.  We all love pizza, and as a bonus we loved their risotto, and indulged there on a number of occasions.

I couldn’t tell you exactly what we ate.  But I know once we had this mushroom risotto that was existentially awesome.  I don’t know how else to describe it.  Actually I could but I think that’ll work.

I don’t remember the pizza we ate, but the square shapes and the simplicity of our cheese, our toppings, and the pizza crust, made it always enjoyable.  I never said it was the best pizza I ever had, but it surely belong in the conversations of the better pizzas in Baltimore.

And after all this time, I impulsively decided today to grab two personal pizzas to go.  Yes as I alluded to earlier, I wanted to keep the Artscape theme going, and I nearly dropped the ball. Since, I was short on time, instead of sitting down and dining it, I opted to get two pies to go, to have a little now, and maybe save some more for later.  And I saved quite a bit.   Don’t read into too much of that just yet.

The interior is nothing to be too mesmerized about.  It’s a basic set up with pictures, a spacious dining room, and a medium sized bar.  Because of this, no pictures are really necessary, outside of the food.  It also made the decision to get my za to go that much easier. 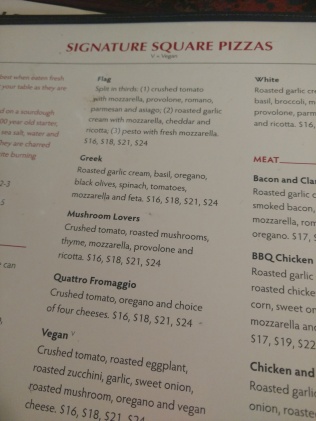 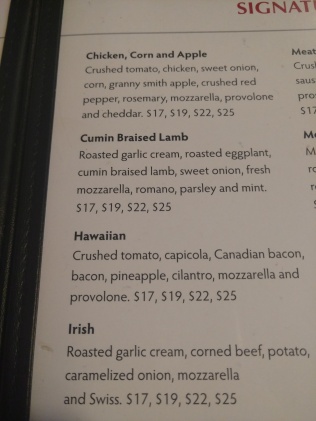 I went with a simple one, The Flag, and then a more complex pie, The Cumin Braised Lamb.

In a nutshell, these are no the pizzas I remember.  Much time has passed, nor should they be. But the charm and the openness and welcoming vibration I got from these pizzas was not there. It’s been replaced with something not as enthusiastic, and not as down-to-earth.  At least not on this day.

The big positive is the coal-fired and thin sourdough crust.  That’s tremendous and a gave the pizzas a distinct taste, outside of the toppings.  Because… 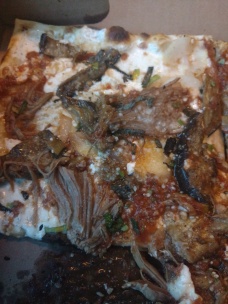 I’ll go with the more adventurous pie first.  The lamb had a lot going on.  The lamb by itself was absolutely terrific.  You can’t help but pick pieces off yourself and enjoy.  I did bit of that. Because otherwise the eggplant didn’t work for me here.  It tended to dominate each bite I took. Now I love eggplant but this was a bit much.  The onions didn’t mesh well either.  As individual entities the ingredients were fresh.  But I don’t think this came together as capable as it should. I I can envision many people loving this because of the lamb.  I loved the lamb but I wanted to love everything, and I couldn’t.  It was merely ok.

Now the usual standbys of The Flag, which is essentially three pies in one, a cheese, a variation of their white, and their pesto mozzarella.

This should be a safe bet correct?  Well not quite.

The cheese and white were missing something.  I tasted more of the crust (which is a good thing sometimes) than anything else.  The cheese was missing something. Maybe more  cheese?  And the white was too creamy and then not creamy enough.  I feel that depended on the bite.  Garlic cream is usually beautiful, but maybe it was trying too hard.

But the pesto will never let you down. I could eat this all day, but I wouldn’t because that would be unhealthy or something.  Yet that pesto taste so real, so magical, and just plain delicious.  I wish I got that as a pie by itself.  It’s fantastic.

What else I want to do is give this another go.  There’s so many pies to choose from, maybe I just found two of them that didn’t resonate with me.  They might with you though.   But a place that carries this much weight deserves to have more of their pizzas sampled.

Speaking of which, if you’re at Artscape this weekend, I would absolutely recommend Joe Squared as a dining destination, if seating is available.  I imagine on a weekend like this that seats might be at a premium.

Next time I’m back I will hopefully be with a friend or two, and absolutely try a couple more pizzas.  Again, one being rather simple, and one being out of the norm.  There’s plenty of that, and options for everyone.  They do offer vegan and gluten free options as well.  Always a good thing.

So this is just the beginning.  I’ve been saying that a lot but it’s the truth. I look forward to coming back and having another go at this.

Maybe I’ll try a special next time myself.

We’ll see you at Artscape.