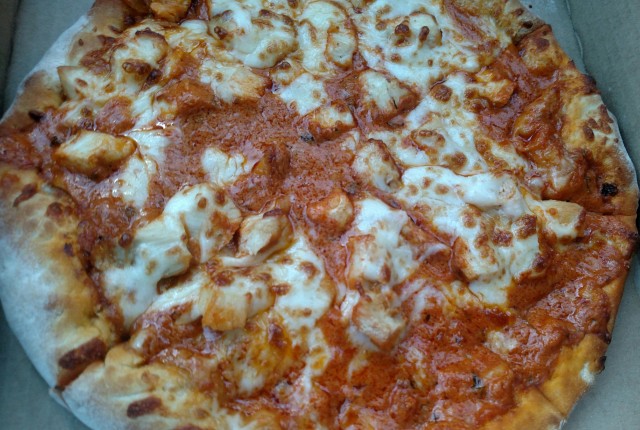 These tend to be my favorites.   I love the obscure, I love the gems, and I love local business.

As this blog continues to grow, and I gain more followers (which I’m so grateful for), I do get requests to review pizza places and certain types of pizza; whether it’s at a restaurant, a bar, a pizzeria, or in the frozen section of our friendly local supermarket.

Sometimes my blog comes up naturally in conversations and one with a complete stranger led to a fascinating request.   I had promised to honor this request in time.  Little did I know that it would be in the same week. 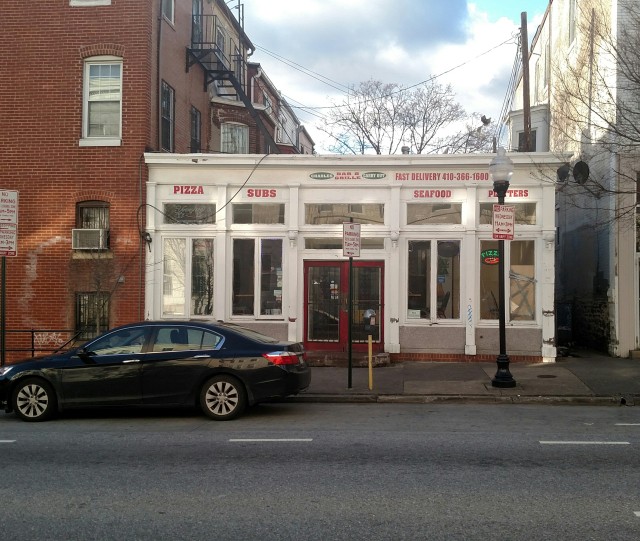 So with that I’m excited to write about Charle’s Bar & Grille, in the Charles Village neighborhood of Baltimore.

With a name like that you might expect the most straight-forward, no bells and whistles, and no ambiance.  And that’s exactly what I expected and what I wanted.  The pizza eating experience can be glamorous but for many of us it’s also just food.  It’s just simple eating. We order a pie, we order a slice, and we go about our business.  Sometimes that’s all we want and it becomes a part of our daily routine.

But even before this blog, I’ve always been very observant of how fun pizza can be.  I love the preparation, the choices, all the slices displayed on their respective trays at yours and my local pizzerias, and just overall eating that slice that makes you feel something.  And I just don’t mean feeling full. 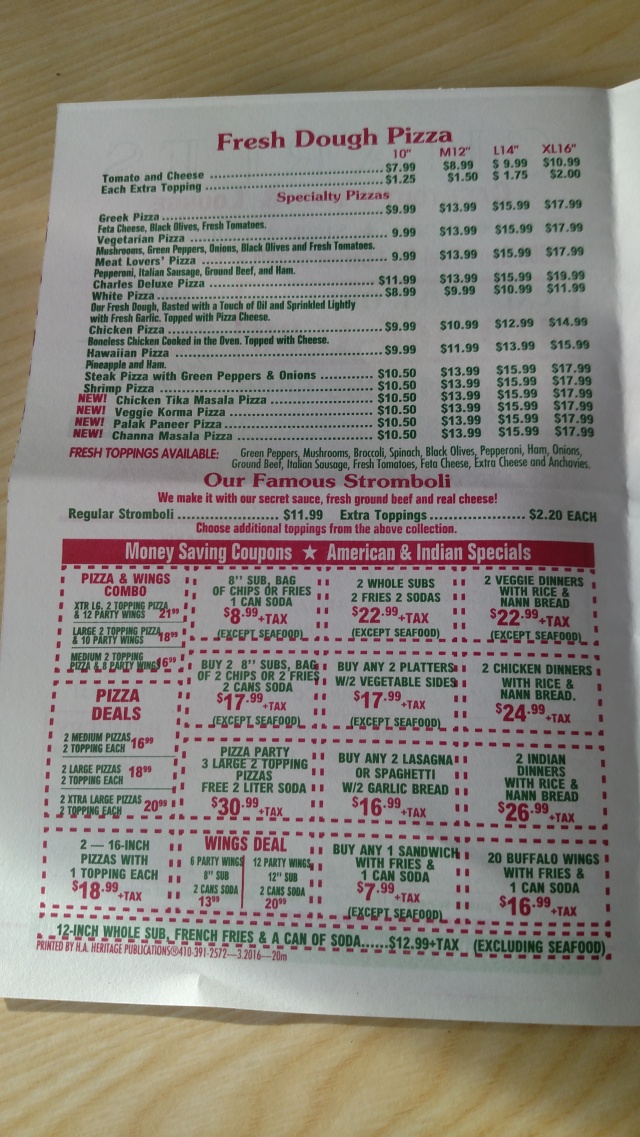 So of all places, why was I suggested to eat here?  It’s one of those restaurants that’s near a college campus, and serves multiples types of food, which includes Italian, American, and Indian.  Yes this is a phenomenon that is sweeping the whole country.  Maybe it’s been going on forever and that part of the my observations went over my head.

Let me get on with it.  My new acquaintance told me to order the Chicken Tikka Masala Pizza.  And give a genuine opinion of it.   I was already intrigued.  And I was also surprised I’d never thought to order it or eat anything similar to it anywhere.  Maybe the opportunity never presented itself.  But with all the combinations of pizza, how can that be?

That’s also one of my favorite parts of a pizza pie.  You can experiment with a wide array of crusts, meats, vegetables, cheeses, sauces, and everything in between.  This would qualify as experimenting and thinking outside the (pizza) box.  Even if my to go order came in one of those generic ‘fresh pizza mmm goood’ to go boxes.  I’m not knocking it.  It suits the place. 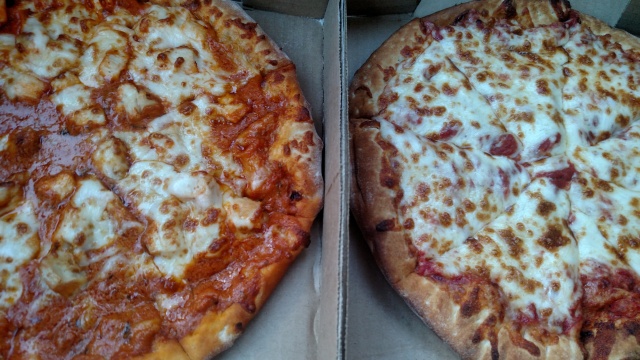 I ordered two individual pies.  I’ll get to the Tikka Masala shotrly. 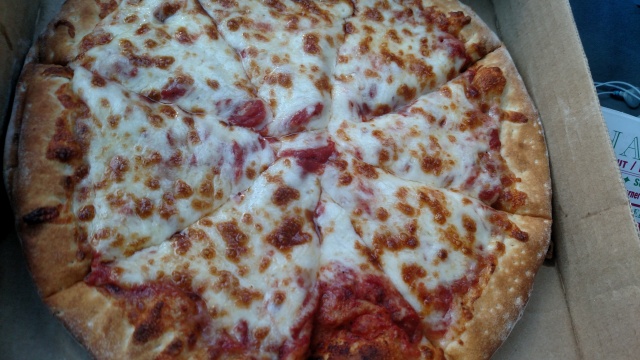 First, the standard cheese.  Yes this is standard.  But with a place like this you shouldn’t expect anything better or worse.  For how this establishment presents itself, the cheese pie is mediocre at best.  I didn’t think it would be anything life changing so I’m not disappointed.   I simply ordered this as a comparison for what was to come.  And for only $5.50, I can’t complain too much.

Now the Tikka… This is something.  It’s literally pieces of grilled chicken and the tikka masala sauce placed on top of a cheese pizza.   You might be thing the tomato sauce may clash with the Tikka Masala sauce.  Not the case.

I honestly don’t know what to compare this too.   I read reviews on sites saying this pizza was earth shattering.  And for a first time trying something so unique, it resonated with them, and they keep coming back.

I didn’t love it that much.  And again I’m saying this with the understanding of where I ordered my pies, and knowing this is not meant to be world class pizza.   I just thought it was fine, and maybe a bit sweeter for my taste than the usual Tikka sauce I’ve grown accustomed too.

There has to be some accountability.  I’ve had better Tikka Masala at various Indian restaurants and buffets, so I do have that to go on.

The dough was fine.  If this were on actual Naan Bread, this would be so much better.  But I didn’t expect that either.

If I were to return, I will give this pie another go.  It’s worth another try.  And I’m intrigued by a few of their other pies;  the Veggie Korma, the Palak Paneer, and the Chana Masala. Including the aforementioned pie I reviewed, these are traditional Indian dishes that many of us have become huge fans of.   I must try these.   And a price of individual pie starts at $10.50, so the investment isn’t too big.

I don’t know when I’ll be back.  This is one of those rare occurrences that needs to happen organically.  I literally found myself blocks away from this restaurant today, so fate and destiny told me to come here this week.

I suspect a similar experience will lead me back here. 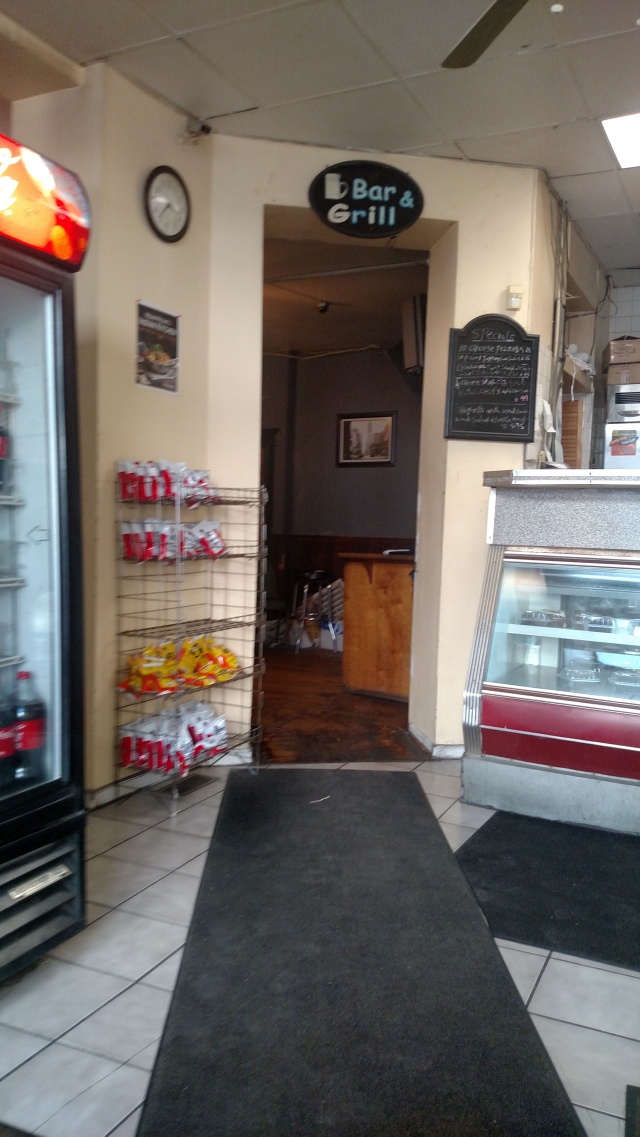 Maybe I’ll even walk into the bar that’s within the restaurant.  But for now I looked it at from afar (or maybe a few feet away), and wonder what was going on inside.  It seemed sketchy, it seemed real Baltimore, and it seemed like a place I should only romanticize about.  Because if I ever walk in, that mystery will go away and I’ll be left disappointed.

But I think people will be enamored with the Chicken Tikka Masala pizza.  I didn’t love it but I sense that many will, just for the fact that it’s so different.

If you’re in the area, give it a shot.  It’s right in the heart of what separates the older part of Baltimore that has a little more character, and what is further South which is busy, like most major cities are, and/or continue to grow into.

And here’s to creativity.