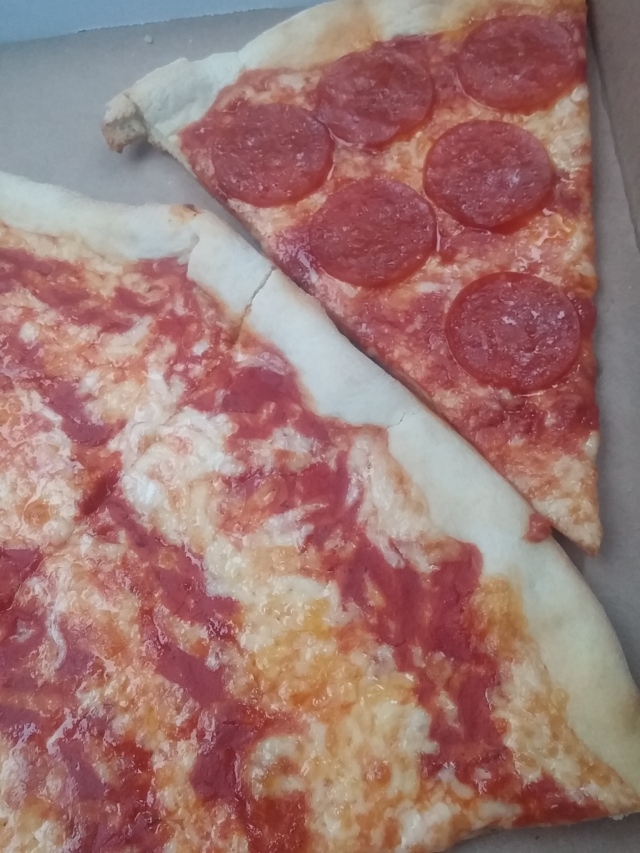 This week I’m back in the great city of Philadelphia.  An unlikely pizzeria search leads me to Mack’s Boardwalk Pizza. I just ate here a few hours ago so this is fresh in my mind.  And speaking of fresh, this was something else. 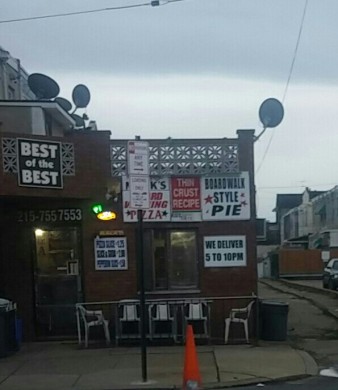 After doing some crack research I find out that this is a spin-off of this place.  It looks like I’ll be working backwards unintentionally.  It’s like that trend in cinemas with flashback scenes and the whole nine.

The storefront is so gritty and so Philadelphia.  At least that’s my interpretation of it.

When I walked in I almost though I wasn’t supposed to enter.  The owner, who is a well-known character and local celebrity, made it clear I was ok.  I swear I thought I had to order from the outside, like any old food stand.

My visit was entertaining and I had yet to get my pizza.   The owner had a direct and no-nonsense demeanor about him.  He was cursing at things on the news and was waving his hands all over the place.  I kept a straight face the entire time.  The energy was a bit funny but also may be due to me.   I was out of my comfort zone. 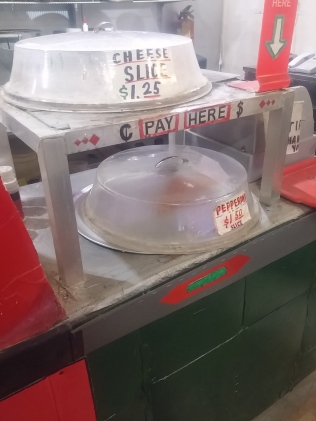 For that and other reasons, I was hesitant to take some photos.  But I got a couple in.  As you can see the slices are in cake stands.   That’s pretty hilarious if you ask me.    The ovens look simple and fits the mold of this entire place.

As for the slices, they were different.  The crust had a soft crunch to it.  It felt like I was eating saltines or a similar cracker-type dough.  I may not be exact on that, but it’s in the same vein.

How about that swirl of tomato sauce on top of the cheese?  That’s boardwalk style my friends.   The cheese was fine but not memorable.  It did it’s job and did it effectively.   The pepperoni is what you would expect, nothing amazing but adequate.

I didn’t have huge aspirations of this being the greatest pizza ever.  If you expect that you will be sorely disappointed.  Not all pizza, or food in general , can be judged on the same criteria.   This was better than I thought but this will never be the best nor is it supposed to be.  I suspect some may rank it highly.  I’ll tell you I did like it more with each passing bite.

Perhaps it’s because it was the energy of it being in South Philly and in a not-so-cosmopolitan neighborhood. It’s authentic and incredibly affordable.

My 2 cheese, 1 pepperoni, and can of soda was only $5. Yes you read that correctly.  That surely made it taste better.   And that mitigates the critiques.

The owner made my brief visit entertaining.  I almost wanted to stay and eat inside but I was on the road, and the seating was quite limited.  Limited as in I’m not sure there was any organized seating.

You can’t judge a book by its cover or the interior.  If you do either, you may be put off. But the pizza is good for what it is and that’s sometimes all you want.

If I’m ever back in the area I’ll definitely try a whole pie with some new toppings.

I don’t proclaim to be an expert on Philadelphia culture and life, but I’m happy to get more of a glimpse than what I’m accustomed to.  It was a visit I’m not going to forget anytime soon.

If you’re in the area or visiting the City of Brother Love, I highly recommend a stop, if nothing else just for the entertainment value.  I rather someone be genuine than a fake and sappy nice.

For a link to my previous posts on the city of brotherly love, go here.