When I first started writing this blog, my primary focus was in and around the Baltimore area.  It was suggested to me that I expand where I could.   Even if it’s just a suburb, a different town will add a different element to my posts.   Since then, I’ve expanded to other parts of the northeast and sometimes elsewhere.  I don’t know where this is going, but global domination would be nice.  Or at least an expansion.    But this week I take it back to the city  I first wrote about.

Don’t you just love how I post a photo and then not get around to discussing it, until the second paragraph?   When you think of good pizza in Charm City I doubt Tavern on the Square makes many peoples’ top 10 or even 20 lists.   Should I even go higher?  This is not an indictment of them.   I actually found some of their pizza enjoyable, if not just flat-out scrumptious.  But there’s more to this place.  It’s become a frequent happy hour spot for dear friends of mine.  I’ve been grateful to be a part of many of these convocations.

But if you know the location, you know this bar has seen many transformations.  It’s been at least four different establishments since I’ve been frequenting this area.  Did I mention that this is nestled in the sometimes chaotic Canton Square?  However, this is one of the more subdued and refreshing locations, depending on what time of day you’re there.  And even at night it’s a little more reserved than some of the other more fraternized locales. Pun not intended.

For many, it’s like any other bar.  For me, I wonder what the identity is.  I over-analyze and ask sometimes reaching questions.  Maybe the fact that it has no niche is just what their niche is .  There I go being deep again.

This is going to be a recap of several pies over multiple visits and in sequential order.  And in general, the pals I mentioned earlier were around for all of them.  I’ll try to simplify this so as to not overlap. 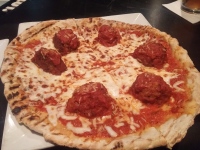 It wasn’t until I saw a good friend eating a gargantuan meatball pizza, that I even knew it was on the menu.  The meatball on this day was heated to perfection.  Look at that immaculately heated crust.  And the burnt cheese on the side is always a nice touch.  You can tell the flatbread crust was heated with soul and the chef was enjoying himself.  The meatball tasted great as well.  I’m thankful my friend gave me a couple of slices to try. 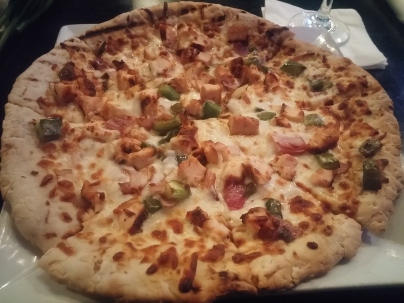 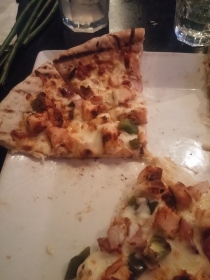 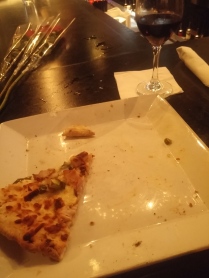 The blackened chicken was at the top of the standings.  This was over a second visit a couple of months later.  The chicken just had a taste to it that worked.  And the accompanying vegetables complemented the protein.  Once again, that crust was heated in stellar fashion.  As you can see, this pie got decimated quickly.  I was happy to share with my friends as that’s what life is all about.

For the next visit, we all ordered a bunch of pies.  This is also where things fell apart.

I ordered the buffalo chicken.  This was the dichotomy of the first two pizzas. It wasn’t heated well.  And you can tell by the pictures.  The golden brown was missing.   The buffalo sauce was too spicy and the blue cheese tasted goofy. Yes I said goofy.  I don’t know what went wrong.  It was good enough to meat but their was nothing behind this.  It didn’t feel like the happy pie I’ve grown accustomed too. And that made me sad. 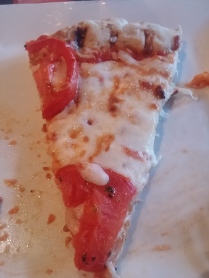 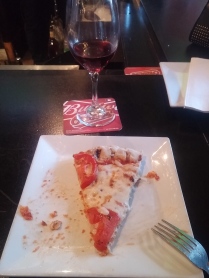 Some friends ordered the margherita. It just tasted like it was there.  The presentation was so-so, and this tasted like there was nothing behind it.  This looked and tasted undercooked.

Finally, a friend ordered the meatball and I just had to try again.  It was nowhere near the level of what I enthusiastically described earlier.  The meatball itself didn’t seem cooked and again the crust seemed boring.   Again, enough to eat, but nothing more.

So what happened?   I have my educated guesses and information. maybe it was an off night.  I was happy to share and swap slices with friend for the third visit.  I just wish the enjoyment level was on par with the first meatball and blackened chicken pizzas.

With that being said, that’s how I’ll remember the visits and the eats.  That blackened chicken was tremendous.  I would strongly recommend if you get the chance.  I look forward to getting another visit in and hoping for a repeat.

Nevertheless,  the positive experiences with good friends is most paramount.  And I’m thankful to have had many here, as either a happy hour, starting point, or ending point. And with that, to Tavern, one final thing needs to be said. Thank you.