I can’t tell you how many times I’ve driven through the streets of Philadelphia, and found myself on the gritty and more genuine feeling of Broad Street.

For the past 8 years I’ve been going to many a show, concert, and sporting event at the nearby South Philadelphia Sports Complex.   I know, what an imposing, yet inspirational name for it.  Well, maybe not inspirational, maybe just there.

My point is, I love Philadelphia, and I’m happy to now be embracing the pies that encompass this beautiful city.

Once again, I don’t know how many times I’ve gone past certain locales and thought nothing of them.  And now, over a year into this blog I actively look for pizzerias of all shapes and sizes.  One of those places is…

…a few blocks up the street from this sports and entertainment venue is La Rosa.

I wish I had come here sooner.  This is at about as palpable and authentic as it gets.

I had no idea what to expect when I walked in.  The outside may look imposing.  But here, as in life, never judge a book (or a pizzeria) by its cover.

I’m grateful that I did.  The lady behind the counter was randomly bringing slices out of the oven and placing them on trays.  It felt like cafeteria style.  And that could imply grade-school but I’m not making fun.  I found it refreshing.  There were no seats and the hallways were as narrow as a studio apartment or efficiency.  Oh I love Philadelphia.

The lady working could not have been nicer.   She was quick to explain what slices were which.  Did I mention that these were square-shaped?  I love ’em this way and it’s a pleasant deviation from the norm.

The slices looked buttery, thick, but not intimidating.  This isn’t a deep-dish or gargantuan concoction. This is a happy-medium that I think everyone, whether you’re a local or an outsider, is going to be appreciate.

There is a one source of frustration I will get to, after I go over the three slices I purchased.

I got the mushroom, the sausage, and the white spinach.  Can you guess the winner? 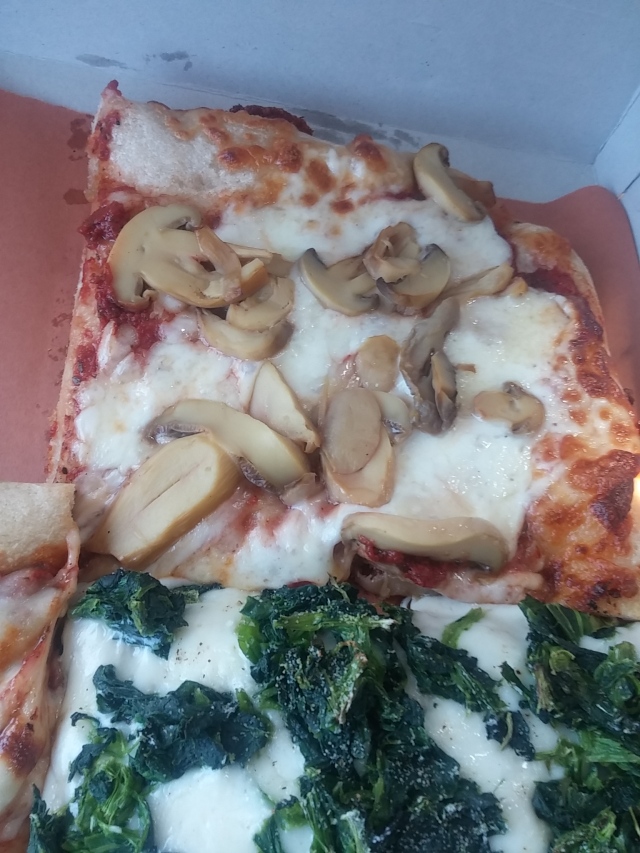 The mushroom was nothing spectacular.  I think they came from a can, which is alright.  But it didn’t really work here.  We know how bona fide mushrooms taste, and this wasn’t it. 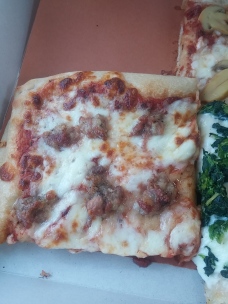 The sausage was eons better than the former.  I was told that it actually comes from the city itself. I’m all for local and it shows.  It added a strong dimension to the slice.  It had the perfect blend of cheese, sauce, and the beef.

But the prize is the white spinach.   I could eat a hundred of these. Actually that’s a lot. How about just one for now?  This tasted like real spinach and the white cheese is on par with any of the best blanca slices I’ve had in some time.  May I have another?

The slight charring, mixed with the buttery and slightly crisp crust really won me over.

And the three slices didn’t even total $10.  That sounds like another win.

So why am I frustrated?   Before a planned visit to a place, I’ll do a little research. Sometimes I go in blind.  I prefer the latter but I wish this time I did a little preparation.

I found out later that their potato pie is their centerpiece and their big draw.  I wish I knew that ahead of time.   I don’t like to do repeat places too often but in this case I may make an exception.  I heard the sausage and potato pairing is what to go for.   Ah this is eating at me.  Oh wait…

I’ll have to come back.  Any excuse to return to Philadelphia is alright with me.

For my previous Philadelphia posts (alliteration is my addiction) you have your choice of here, there, and this one.  And here’s another.