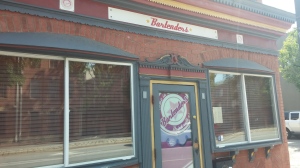 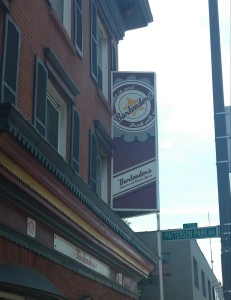 I have wanted to write about Bartenders, since I began this blog.   This, among a select few other spots, were the inspiration for me to write about pizza.  And there’s so much fun that goes with pizza, besides eating some amazing pies.  It’s the joy of each others company, the drinks you have with your meal, and the memories that come with it.   If that’s a little too cheesy and overly sentimental for you, then good.

I first ate here nearly four years ago, through recommendations of regulars and good friends that have said their pies are the best in town.   And the atmosphere is one that is still incomparable.  Their are local bars and then there’s local bars.   I have found myself very comfortable eating and drinking a glass of wine their solo, on many an occasion.  The head bartenders (who are also the owners) are very personable and people I’m glad to call my friends.

Now I’ve dragged this as far as I can.   I love their pies.   I always have and always will.  The first time I ate there, I was taken for a ride on culinary excellence.  I don’t know where the dough, the cheese, the topping, and most of all the soul came from, but this is one of the best pizzas I’ve had period. And I would go here maybe once or twice a week from 2012-2013, and gained quite a bit of weight in the process.  I didn’t care.  I loved every second of it.

But if there is a down side, it’s that you get so spoiled from eating amazing creations like theirs, that other pizzas start not to taste as good.  I’ve learned to be educated about that and realize that not all pies are created equal.  And I should only judge based on taste and the energy behind it.

Here is where it gets funny.  I knew full well I was going to write about this spot, lauding and touting it to kingdom come.   But the last few times I’ve been the pizza hasn’t been up to the level I’m used to. It’s been good but the excitement and thrill I would get wasn’t there.   At first, I thought it might have been me.  But it was on three separate occasions.  It was still really good but not on the inspirational level I’ve become accustomed too.

But luckily a dear friend had been cooking the za’s there, but we rarely crossed paths at said establishment itself.  So I mentioned to her that I don’t think they’ve been as good as I remember.  She suggested I come in during one of her final shifts, and she’d make it for me personally.

And I’m glad I did. She made a masterpiece.   I’ve had The Spence before, but not like this.  Our friends who have been here repeatedly know the pie and know the man behind it. 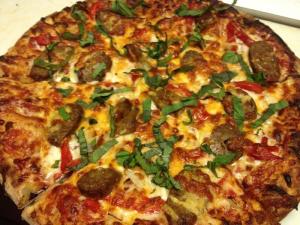 This is a work of art.  I think it’s worthy of multiple photos. So here’s another. 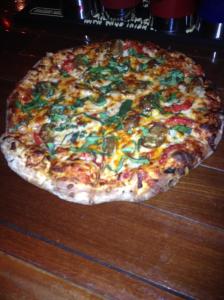 The combination of the homemade sauce, cheddar, parmesan, mozzarella, and andouille sausage alone is enough to make this grown man act like a little kid at his first pizza parlor!  Oh my goodness this was made to perfection.  I’ve had it before but not like this.   The red peppers, onions, and fresh basil complete and complement this pie perfectly.  This is up there with some of the best ever.

Now I’ve had their cheese, white, and garden (vegetarian) as well, and loved those too. But this blows them all away. The crust, the way it was cooked, and the way everything melted and blended together is genius. And I mean this with all sincerity, this was one for the ages.  It was the perfect send off for her and the perfect early birthday present to myself.  I don’t think it could have been done any better.  And I’m glad I waited this long to write about this.  Faith has been rewarded.

I love that they give you paper plates with your meal. It’s a little detail that I don’t want to go unnoticed.  I prefer it versus a regular dish. 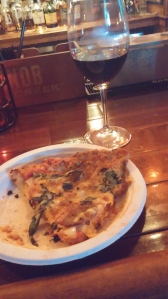 But maybe my last few purchases of various pies such as the Barbecue Chicken, Peyton, and Tarlek just didn’t move me like the others.  It’s meant as a compliment.  The expectations of this place are extremely high and they will continue to be.

If you’re curious as to their menu and the selections I mentioned above, click here.

As my friend moves on to bigger and better, I will always remember Bartenders for their amazing pizza and good atmosphere.  I have many great memories but this might have been one of the best.  I look forward to more momentous occasions and many more delicious pies in the near future. 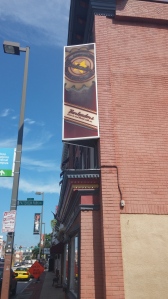