If I had only said only ‘Lotsa To Like’ that would imply that I really enjoyed it, but there was that little extra missing.  So I said I love it.  And indeed I do.  No embellishment of the truth is necessary.

Lotsa (which now has several locations and growing) of Towson, MD is simple, effective, and to the point pizza.  It’s stone fried and even though it’s the equivalent of fast food, it tastes anything but.  This tastes like a real pizza.  Nothing about this is done halfway, even though the heating times ranges from three to five minutes.  And in those few minutes is where magic and wonder happens.

I know many folks are purists.  They wouldn’t even consider going into a pizza shoppe like this one.  I’m passionate about pizza but at the same time I like to give new places a chance.  And even though this is an expanding chain, it’s still the first time for me, and I’ve wanted to eat here since the Summer.

And to me pizza is pizza.  If it’s good than it’s good, no matter how it was created.  I respect the original forms but can appreciate what’s going on today.   I’m a traditionalist myself , but I would like to think there’s room for everyone.

Yes, I only heard about Lotsa going back to June, when it was on the verge of opening.  I had promised myself I would eat here before the year would be over.  I was cutting it close but I’m a man of my word.

I did no research on this place beforehand.  I wanted to go in with as little knowledge or biases as possible.  It’s good to know a few things ahead of time, such as the menu, and whether it’s casual or higher end dining, but unless absolutely necessary I’d like to have an unexpected and organic experience.   Calling it one or the other would be an understatement.

I had avoided as much as I could to have any preconceived notions.  But the way friends talked about this place made it seem like it was a fancier dining establishment.   To my pleasant surprise, it wasn’t.   Everything I mentioned earlier, about how it was quick and seamless I only found out about upon walking in.  I find that so cool.  Expect the unexpected, and don’t expect anything at all  For me at least, it’s more enjoyable that way. 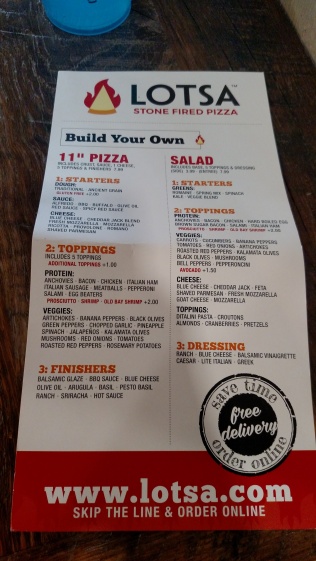 So this is a recap of two separate visits.

With visit number one, it was lunchtime, but I went with their Breakfast Pizza.  In the two years plus of doing this blog, this would be my first breakfast pie, and what a way to start. I adore this thing.   I was afraid it was going to be too heavy with the sausage and bacon, but it was just right.  The cheddar jack is the perfect cheese for this type of pie.  The spices from everything all come together so nicely. 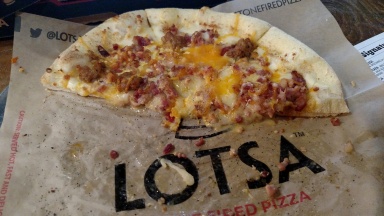 But the standout is this dough.  It’s that comfort food style crisp and chewy bread that fits perfectly with this time of year.   This is the kind of bread I want when it’s freezing cold and I want to indulge in some bread in the comfort of my own home, with friends of in solitude.  It represents winter weather perfectly.  That’s not to say you should only have it around this time of year.  But I can’t say enough good things about their dough.

Second, is the Bianca.  And doesn’t this just look like Christmas?  Look at these colors.   And again that dough.  Oh my goodness this is so good.  It’s charred to masterpiece like levels.  And that stone fired oven is a thing of beauty.    This bread tasted as good, if not better for round two.  Additionally, the provolone cheese truly makes this pizza something special and one I would get again.

Actually I would get either of these again.   The garlic, tomatoes, basil, olive oil, and all the other cheese with the aforementioned provolone make this a hit.  And it serves an audience seeking something lighter than the breakfast pie.  Did I mention it looks so Christmasy?   Yay!  I love Christmas!

As I mentioned, there’s currently just a few locations.  Local to our friends in Maryland, would be Towson and Annapolis.  So if you’re in the area I highly recommend checking them out.  And at about $8 for a personal pie, you can’t go wrong.

Oh and they were playing nothing but 90’s pop music throughout both my visits.  If that doesn’t sell you than I don’t know what will. 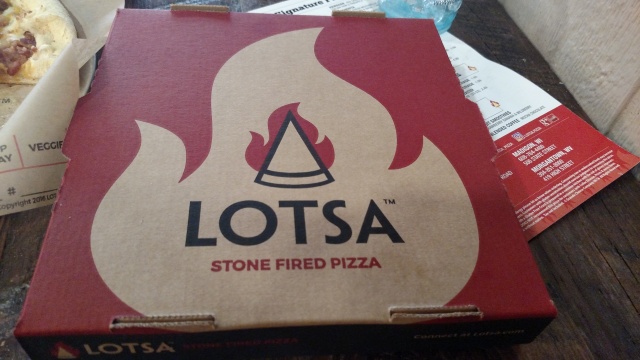 Here’s their menu and more about Lotsa itself.

And here’s my previous visits to Towson in the form of pizza.

There’s a lot of holidays left and I hope you’ve been enjoying them with the people you love and maybe eating some good za!

I love the holidays!