I had never heard of Wiseguy NY Pizza until just a few weeks ago.

My first experience at the Arlington location was magical and I didn’t know until after I left.  I’ll save that for the end.  I had all the intention of getting around to recapping this experience by the end of November, but as all things nothing goes as planned nor should it. Especially when blogging and having fun.   A chance visit to the Washington, DC location within the past few days brought about a second helping of some dynamite slices. And the experience was something else.  It was something different. It’s DC. I wouldn’t want it any other way.  Speaking of which,  I’ll start backwards like they do in some cinemas.

It was lunchtime and the line was 20 people deep.  It moved fast and fortunately I wasn’t in any rush, nor should I truly ever be.  But I’ve been the guy who’s paced back and forth and obsessively stared at their phone, hoping I still had time to get my food and rush back to work, without management being upset.  That’s the sense I got from most of the folks around me.  It wasn’t laid back but would you expect anything less?   The guy behind me especially seemed very programmed that if I hadn’t ordered my slices right away, he may have interjected and started that sighing and whining you see in the cinemas.   See I knew I mentioned cinemas earlier for a reason. 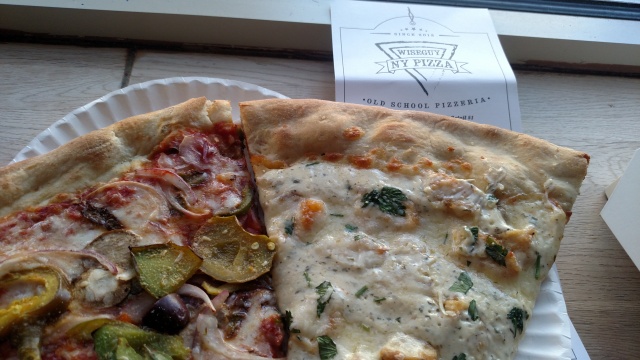 That’s the end of the negative.  I ordered the Backyard Veggie and a Chicken Ranch.

I said that was the end of the negative but I’ll quickly state the veggie was the one slice I had a hard time eating.  Of course I did but it was a bit too spicy for me.  Ingredients for all slices are shown above. The chili peppers were incredibly aggressive.  And I’m not one to complain about spices. In general I’d like it hot.But it didn’t work here.  And I feel the tomato sauce does not complement any of these vegetables.  It felt like too much and everything got lost.  The olives were good though.  I picked those off.  This is also where the crust seemed not to matter.  And the NY Style thin crust was wonderful on the next three (wait, hold that thought) slices across the board.

The Chicken Ranch Melt was divine.  It more than made up for the previous slice. The crispy chicken slices and that house made ranch sauce were perfect to eat enough by their lonesome but wait, there’s more.  Throw that on top of a white pizza, and we have a winner.  But the true standout is the parsley. It added something that is too good for words.  If you love parsley you know what I’m talking about. But seriously, this made the slice when it was already made. 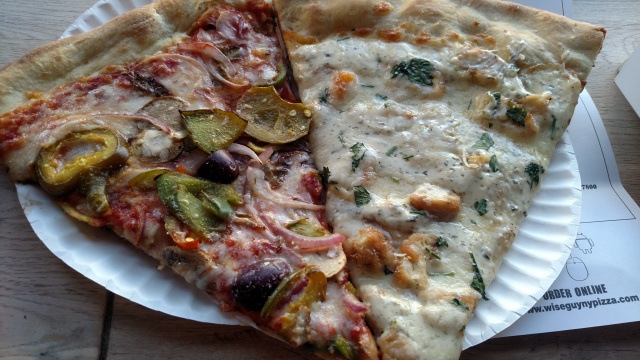 I wish I could end the post here and split this into two parts.

Actually that’s exactly what I’m going to do.  Arlington, next week.  Trust me, it’ll be well worth it. 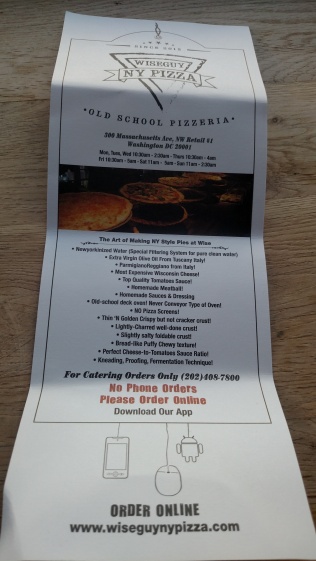 Here is more about this less-than-five year old pizzeria, their menu, and online ordering for those local.

One thought on “Word To The Wiseguy”