Sometimes the  cheesiest and dopiest of titles just come to me.  You can write this stuff ladies and gentleman.   But this pizza is up there with the best of ’em.    But don’t take my word for it.  Vesta Wood Fired Pizza & Bar out of East Rutherford (or is it in Carlstdat),  NJ was voted best pizza in the state by NJ.com. 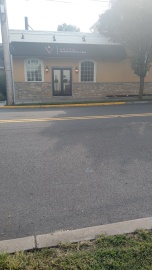 If you look at the list, it’s written very simply, similar to my posts. I dig it. So what makes a pizza number 1? It’s really all so subjective and based on opinion.  Could be based on anything else?  Are we talking word-of-mouth, sphere of influence, or confirmation bias?  None of those three possibilities are necessarily mutually exclusive by the way.

Nevertheless, I was in town recently for a concert and maybe some other sight seeing.  The latter never really came to fruition but I did have time for some good pizza.  Thank goodness because I almost didn’t walk in.  I drove by a couple of times before and thought the outside look a bit intimidating.  The nearby neighborhood of Carlstadt (or is it East Rutherford haha) looks more down-to-earth and has the feeling of a tight knit community.  Never judge a book by its over as Vesta for all it’s gloriousness outside, had the most endearing and approachable charm inside.

Before I go on a bizzare tangent, Vesta is snugged in between both towns, literally.  I took pictures of both since they were literally yards from each other. 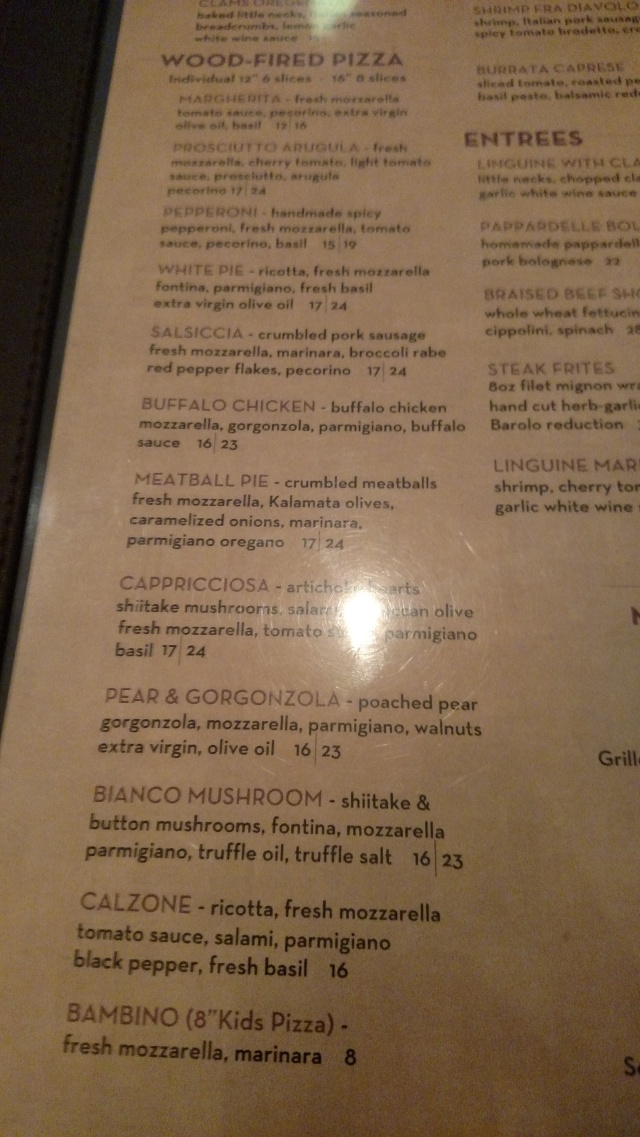 I went at a quieter time of day, which I tend to do, to get the most personable experience as possible.  Jennifer, who I promised to mention by name, was working behind the bar. She could not have been more helpful in suggesting the right pizza pie.

I was leaning towards the Pear & Gorgonzola, when I had initially wanted a simple Margherita pie. What on earth was I originally thinking?  This is before I learned about Vesta’s high praise.  I went with the organic choice of the unique pie but not without a further suggestion.  She had recommended throwing some sausage onto my pizza to give it more of a breakfast feel.  If I had only listened to her. 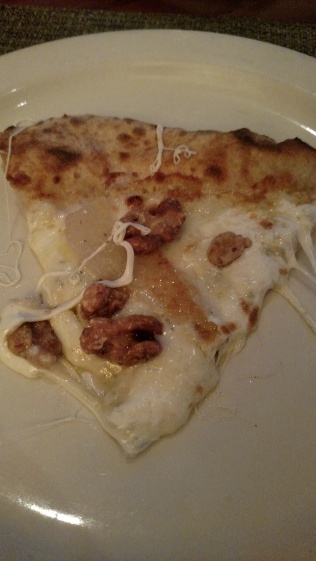 The pear is the stand out here.  These pieces of fruit were custom made for the Summer season.  But you can enjoy this year round.  The gorgonzola and walnuts added some pop to an already intriguing choice.   My minor complaints in hindight were that the walnuts were not as sweet as I hoped.  Maybe that’s where the pear comes in.  Otherwise I have no issue with the walnuts. It’s always fun to see your not-so-typical food items place on top of a pizza.  And that olive oil, mmm..  The ligher and thinner crust, was heated to near perfection.  The fact that it was thin made this all that much more appetizing. This is a pie I would definitely get again.  But only if…

…If I taken Jennifer’s recommendation to heart, and added sausage, I can only envision how much better this pizza would have been.  And I’m thinking earth shattering and off-the-charts levels.   It’s only pizza but when I’m a little bit away from my area, and looking to branch into unfamiliar directions, all advice should be taken under consideration.  I’ve been known to be indecisive when picking the right pizza, but that doesn’t mean I can’t land upon the right one.

She mentioned their #1 ranking to me, way before I did any research.  I wonder if this had any influence on my pizza.  The bad guy in me would make me be deliberately contrarian. But power of suggestion aside, this is a pizza I’ll think about often. 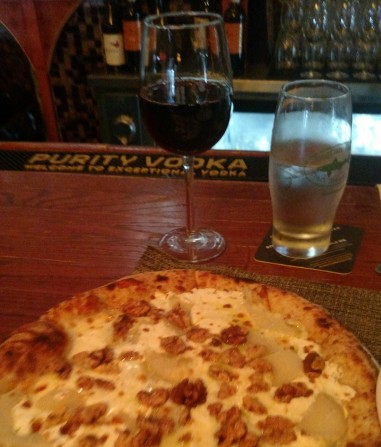 And nothing like some vino to go with my za. 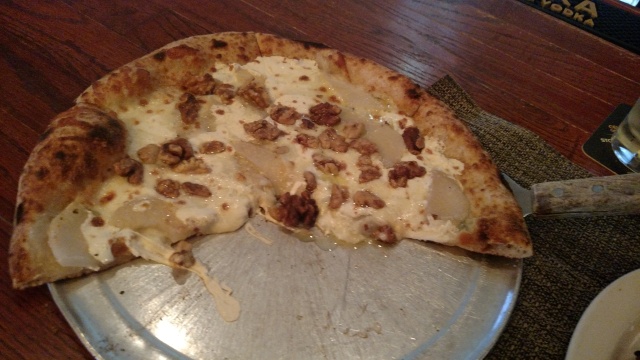 I took the rest of my pizza to go, and it tasted just as stellar the next day.  That’s another true test of a pizza, or most foods for that matter.  If they have a sustainable shelf life after original feasting, you may have a winner on your hands.  But man, I only wonder what could have been if I added the suggested protein. 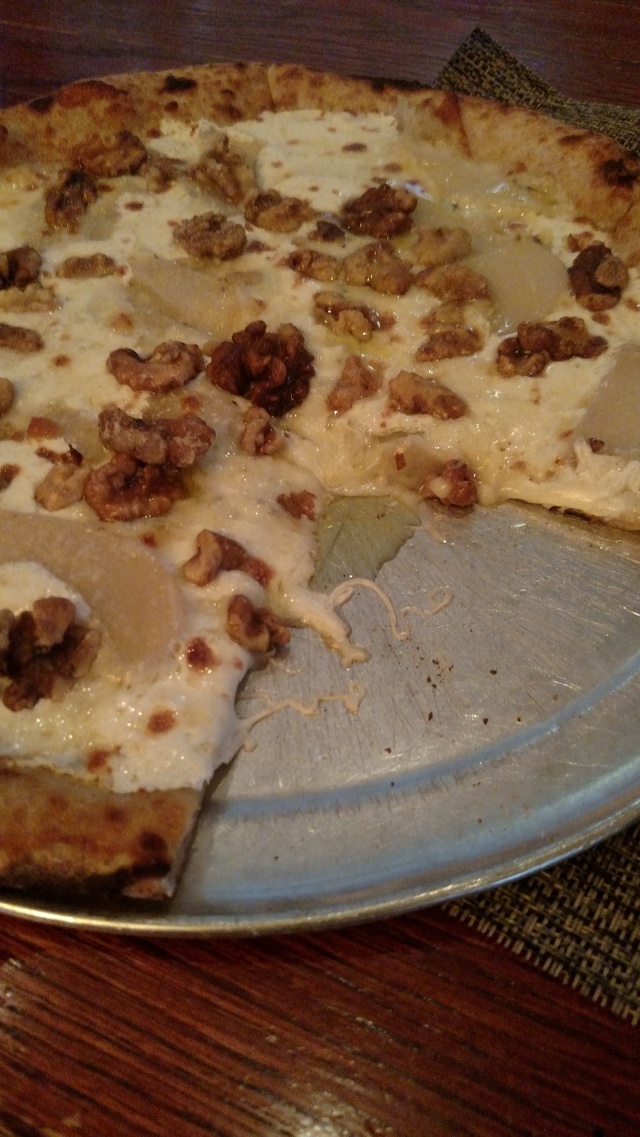 As I’ve said before when I visit a joyous place, it only means I will want to come back.  And for being a littler over two hours away, and just outside New York City, a return is not as far away as it sounds.   This was a fun way to cap off the Summer, even though it’ technically still going for a few more weeks.

There’s a lot of soul and passion behind their pizza and the whole operation.   If I lived nearby, they would absolutely see my business once or twice a week.  What a great addition to a community I know nothing about, but I sense there’s only good.

Here’s a link to their lunch and dinner menus, along with contact information.

Damn this pizza was good.  I can’t wait to do it again. If you’re in the area, or planning on visiting, definitely stop by.

Until the next one.

2 thoughts on “Vesta Is Besta”