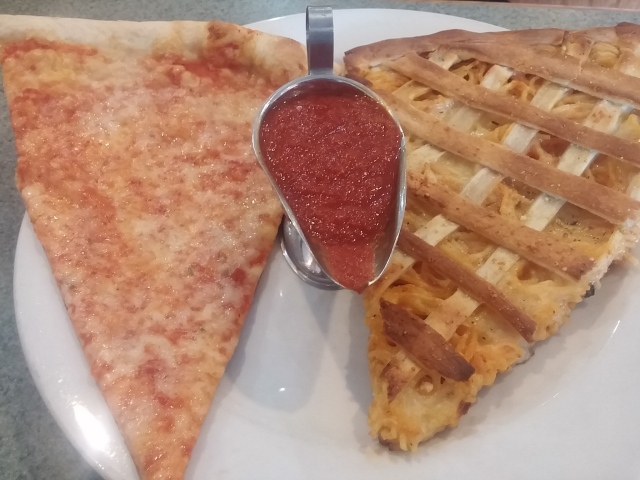 Some pies and slices are purposeful, some are marvelous, and then there’s some that are life-altering.   The latter may have happened this week.

I know we’re only talking pizza but sometimes we get those moments that are divine.

You’re mouth must be watering at the picture above. 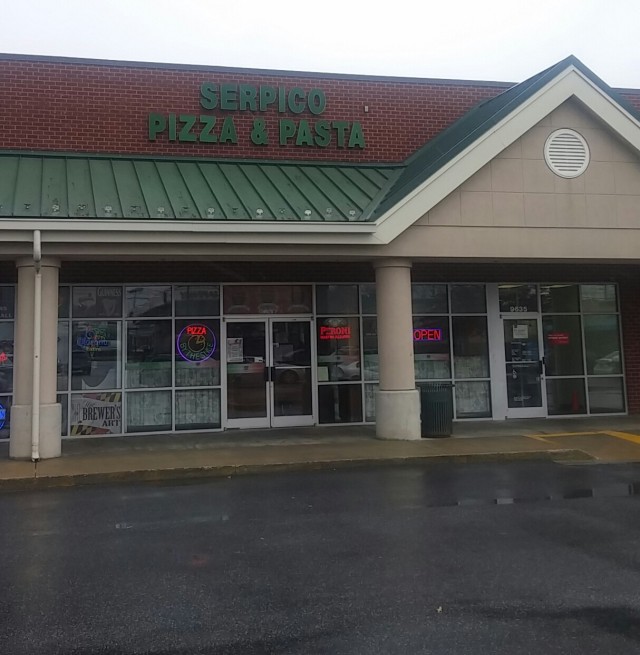 A dear friend told me, in his opinion, that the best cheese slice in the county is from Serpico Pizza & Pasta of Perry Hall, MD.   The best?  I don’t know for sure.  It’s all relative, but it’s high on my rankings.

Per suggestion, I ordered the cheese and the spaghetti slice. 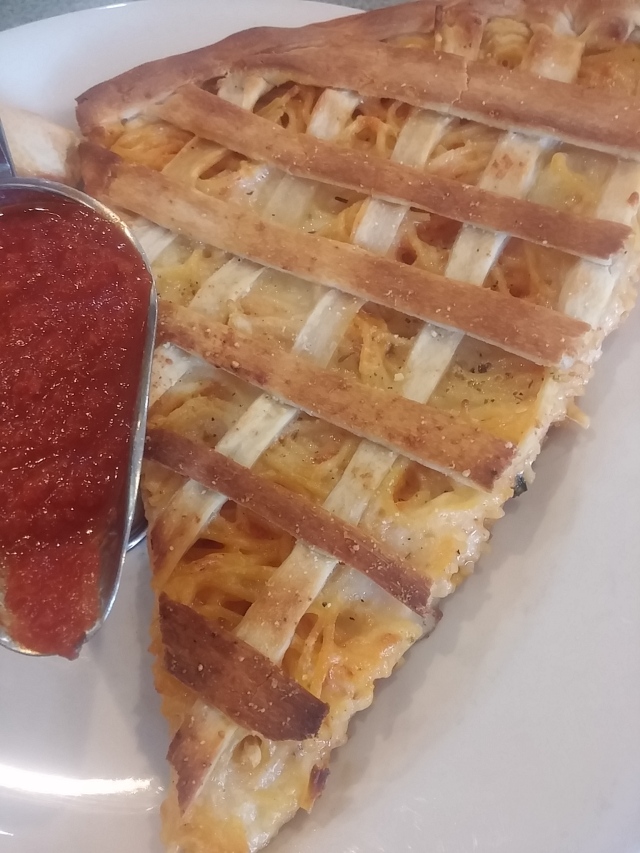 The spaghetti slice is an interesting concept.  Before living and hanging out in the Baltimore area around 2000, I never noticed a spaghetti pizza.  Maybe I’ve been under a rock or just not paying attention.    But ever since, when I see a pie with one of the best pastas, I do a double-take.   It’s a carbo loaders paradise and a health nuts’ nightmare.   In this instance I’ll settle for in-between.

There was no need to peruse the menu, I saw the two slices I was destined to have and I went about my merry way.  Actually no I ate inside and enjoyed the atmosphere.

Did I enjoy the food?  Absolutely.   The cheese slice was tremendous.  It just had a little more soul than many cheese I’ve had recently.  The crust was tasty, crisp and reheated to perfection.  The cheese itself just felt real.  It seemed like there was more to it than just putting a pie together.   Maybe it’s the family run energy behind it?   I felt it when I walked in and the staff seemed so kind. 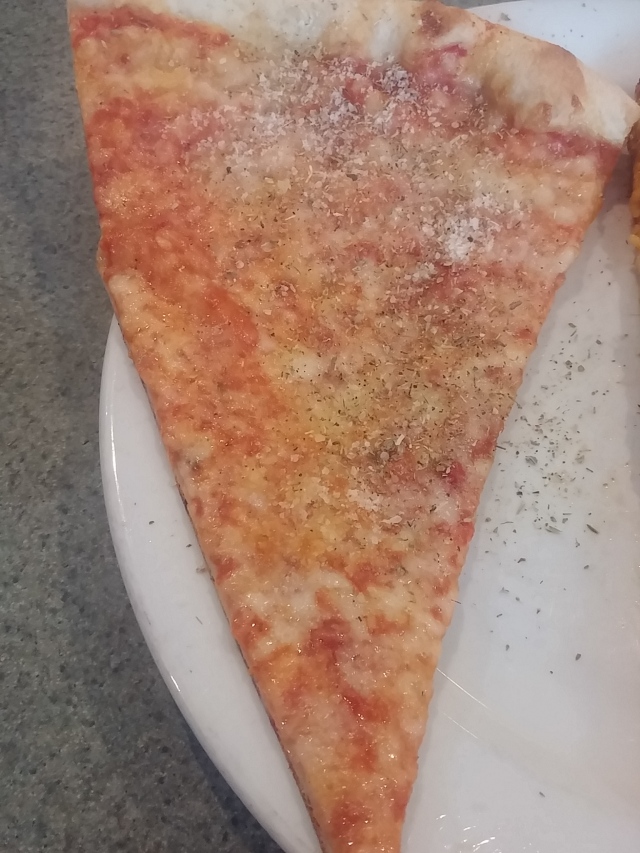 In what shouldn’t be a rarity for me, I sprinkled on some parmesan and oregano for an added kick.  Not that it was needed but it was gravy.

And speaking of gravy…  The spaghetti was dynamite.  The sauce is something from beyond the stratosphere.   Well maybe it’s from the area.  However, I perfect the dramatics and the pageantry. 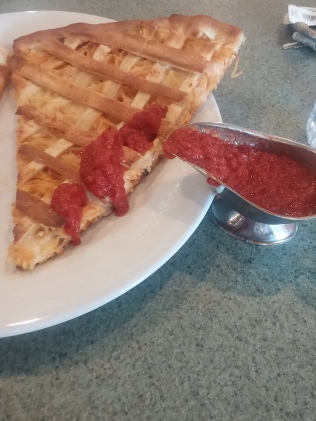 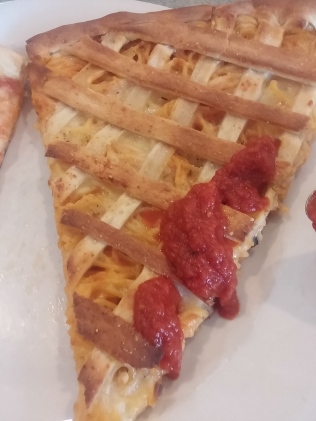 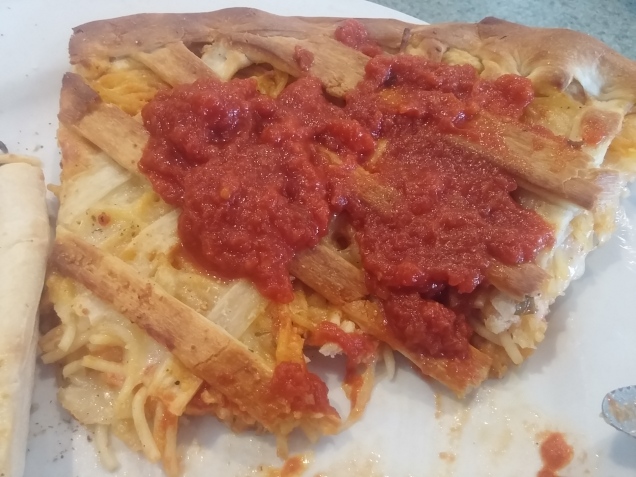 The crust itself was heavy but that’s the point.  As you will see in a photo,  I couldn’t eat it all.   What’s the fun in that?  It was perfect as a leftover for dinner.  The spaghetti was yummy.  It tasted like mom used to make.  I was grateful to find a few noodles on my plate and chowed down on them separate from the pie itself.  This is an uplifting and revolutionary slice.  I must come back for more.

And how beautiful is the presentation?   I know that only altered my taste buds for the better.  That gravy boat did it for me.

Since I was able to double-down on pizza and pasta, it only makes me yearn for more.  I’ve been told by several sources that their food is top-to-bottom breathtaking.   That’s what I felt and that’s what I like to hear.

Let’s do it again soon.