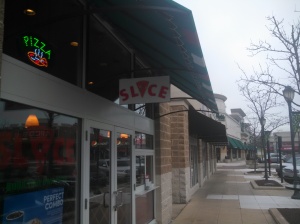 Since being around the Baltimore area for the past 15 years, I’ve always been sentimental to White Marsh. So it’s about time I review a pizza place nearby. And this brings us to Slice Pizzeria on The Avenue.

What stood out right away was how tiny the inside was.  It only seats a few people indoors and there are tabletops outside for dining when the weather is nice. They also have a side entrance where you can order from the outside (as seen pictured above), which gives it a local shoppe feel.  I find that awesome.  In the nearly two years they’ve been open, they have developed quite the following.  And being next to the movie theater is a plus.

Unfortunately, I feel their pizza has become movie theater quality.  When I was originally going their slices were quite tasty. They lived up to their New York Style thin crust reputation.  In my past few visits, I have noticed a decrease in goodness. The slices I will review were based on my most recent stop.

First up was The White Pizza.  I just didn’t get much from it.  It was ok.  The crust was fine.  The cheese just seemed lacking.  It didn’t have the usual flavor I have come to expect.  It tasted more like cheese on toast.

Next in line, we had The Shore Pie Pizza.  And boy did this look promising.   The ingredients are grilled chicken, butter, Old Bay, mozzarella, and blue cheese. Now you would think this would be a recipe for success.  I really wanted it to be.  But again, it just didn’t come together.   I really like the idea of butter as an ingredient.  But I never felt like I tasted it. In addition, the Old Bay and blue cheese didn’t seem to click.  I can imagine for many, this is a match made in pizza heaven.  I just wasn’t feeling it.  And the chicken was ok.  I’ve had better pieces of chicken on a pie. Again, this was an ok slice.  But I can’t say I’d try it again.

And lastly, we have the Rancher Pizza.  We got bacon on this one, so it’s gotta be great right?  There’s grilled chicken again, barbecue sauce, ranch dressing, and the aforementioned bacon.  This just didn’t work. I had a hard time eating this one.   I didn’t love the bbq sauce.  It was too sweet for me, but that is what wasblisted.  I found this one the most disappointing. Since they have one of the most creative and inventive menus I’ve seen, I will give it another go.  I just recall their pizza tasting a whole lot better. Some of their slices are over $5, which is a bit steep for me.

There’s a lot of positives though.  The staff is always friendly and happy to assist with questions about the unique entrees. Every time I’ve gone in, they’ve been smiling.   In addition, their slices are of generous proportions, which could justify the price somewhat. Just because I didn’t love it doesn’t mean you won’t.

And judging by reviewers, a lot of people are fans. I do wish Slice all the success and look forward to trying another concoction again. Thanks so much. Best, Ideen