I’ll be the first to say it, but I’m really not.  I don’t care for winter.  I don’t get the excitement that others do, and I don’t think I ever will.   I respect everyone’s view and feeling about it, but it’s not for me.

Maybe it’s past memories, when I was a kid and maybe even more recent than that, of feeling trapped for upwards of a week, with little resources, no food, no one really around to hang out, and nothing but my thoughts.   And that can make someone stir crazy and a bit lonely.

So we had our first significant storm of the season recently, and those fears returned.  There’s trauma from the past rearing its ugly head, and those feelings of dread that might be warranted, might be justified, but are they really justified.   Sometimes you (I) just need to get out of your head and just appreciate things for what they are, what is, and what is being.  It’s all temporary anyways.

Just as this day (and it was only a day) of having nowhere to go, which in many ways can be a good thing.  I don’t need to worry about work, doing anything, and anything is the operative word.  I did absolutely nothing except relax, have a little food, enjoy some vino, and lay in my bed with my cat.   Saying it was needed is incorrect because ‘need’ implies lack.  So I’ll just say it was welcome, calming, and refreshing.

Where is all this going?  Well I did somewhat fall prey to the chaos of having to buy a few groceries in case the weather turned worse than expected (it didn’t come close), which lends itself to the perfect excuse to buy frozen pizza, which is something I would like to do more of for this blog.

So with that I present to you two from Urban Pie Pizza Co.

I had seen Urban Pie promoting and handing out free samples of their pies (sometimes whole pizzas) back in 2015 but it didn’t register and for whatever reason I didn’t let it resonate.  Well that would make sense right?

I love how their pizzas are inspired by various neighborhoods.  That’s different and that’s a draw alright.

Because of that this will have to be revisited again sooner than later, but for now the two that were available (bear in mind the pizza aisle was somewhat decimated to the pending weather situations) were the Truffle Alfredo with Shiitake and Crimini Mushrooms (North End neighborhood, don’t ask me where that is but I should know…) and the Pesto with Fresh Mozzarella out of Little Italy (yeah I know…)

Can you guess which one I liked and actually preferred much more? 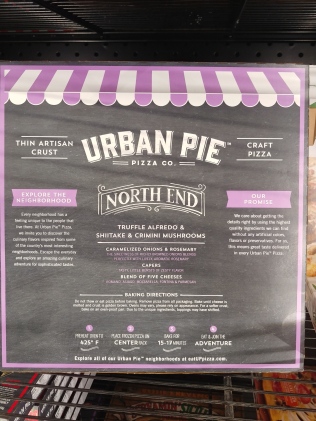 I wanted more flavor and it just didn’t seem to come through.  And I wanted to make sure I heated this thing properly, and even if the timing wasn’t perfect (I’m giving the benefit of the doubt here but you’ll see the flip side on the next pie) I still expected some tremendous flavors, but it fell short. 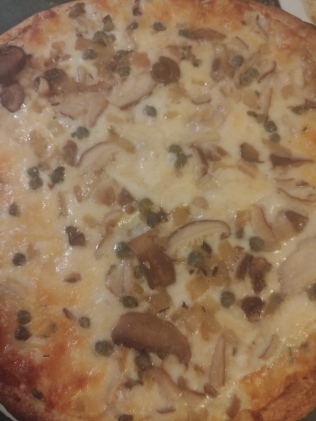 In a way that might be good.  Truffle can be too rich for some.  I know it’s been too powerful for me to take on certain occasions, but I didn’t get much of anything.  And same goes for the cheeses, onions, and mushrooms.  It was a bit of a disappointment. 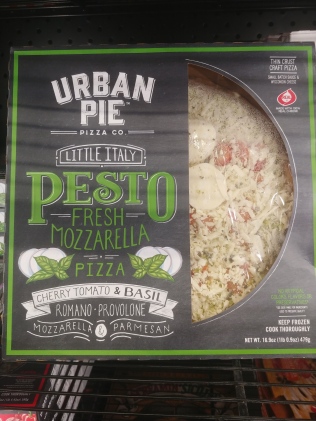 On the contrary, the Pesto Fresh Mozzarella is an absolute winner. 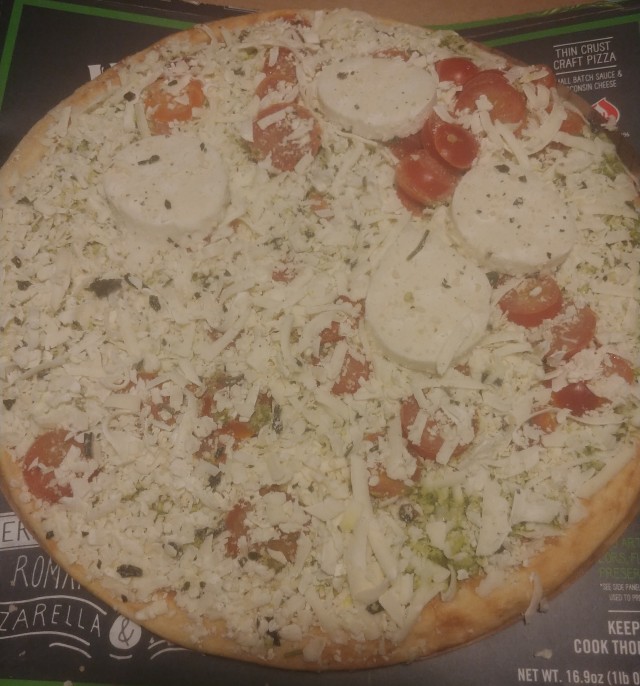 And you see it may looked overcooked in some parts, and maybe the tomatoes looked under cooked, but it didn’t matter.  The pesto and mozzarella are gold and golden, like the crust.  Haha that was meant to be funny.   But regardless,  I got more enjoyment out of this slice than the previous pie of course.

The way the mozzarella goes from pre heated to becoming one with the pizza is a joy to see.   And I’m so glad the taste matches the visual.   Terrific stuff.  This is art. 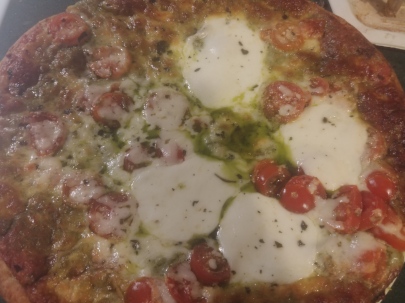 And if it wasn’t for being ‘forced’ inside during a snowstorm, who knows when I would have gotten around to trying Urban Pie.  That sounds like a slight but believe me its not.  It was meant to happen this week.  And it will be meant to happen again soon.  When it’s supposed to.

To learn more about Urban Pie, here is their story,  contact info, and the link to find their pizzas near you is at the upper right hand corner of their page.

This was rejuvenating and I look forward to Spring, and what pies cross my path and what finds me, or maybe I’ll find some myself.  But for now…