It’s already July and that makes me sad.    Some people view the upcoming 4th of July Holiday as the halfway point.  Halfway point of what?   Ah I don’t even want to say it.

The intrigue continues as I’m literally going to review four slices that I (sort of) purchased earlier tonight.  How quickly I forget how apropos this was going to be.  I’ve expounded on different ways but I’ve never been one to believe in coincidence. 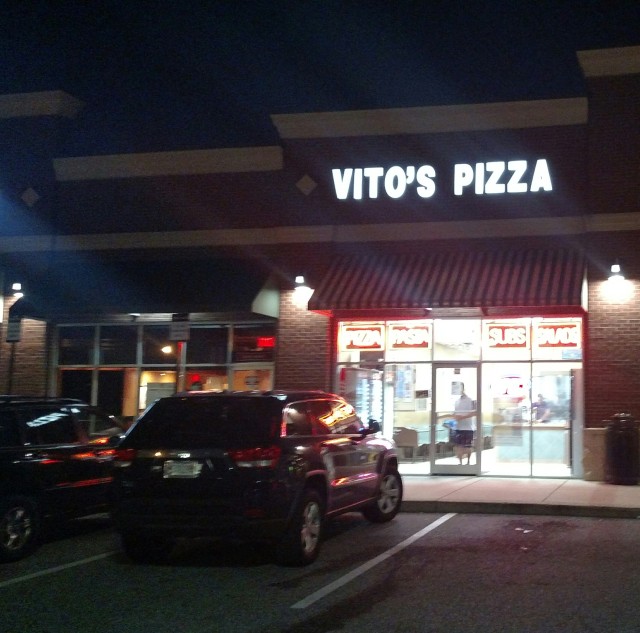 I found myself at a familiar place, Vito’s Pizza in Baltimore.  For my friends in Baltimore, you might be asking which Vito’s exactly?  There’s too many to count.  Or maybe I just don’t feel like counting.  No, I just don’t care.  This is my Vito’s today and their website offers no help and that’s fine with me.

Sometimes we just want pies without all the other bells and whistles.  Even though a multitude of businesses have some form of a social media presence, some like to live in the past.  I’m ok with the past and the simplistic way of going about things.

To be specific, the neighborhood is called Cedarcroft.  This is the first time I’m hearing this.  I’m not sure what to make of it.  I find the whole thing hilarious, but it’s really not that funny.  Haha.

I went to a university not far away so Ii’ like to consider it Towson/Baltimore border.  I don’t know if this place existed when I was a student, but nevertheless now the place is infiltrated with them.  Students.

The vibe in the area is something I subconsciously (wait what?) paid attention to, but never put my finger on why I was drawn to this place.   But I figured it out on this night. There tends to be a sense of community and togetherness in the plethora of neighborhoods behind the strip mall where this pizzeria stands.  Whether it’s genuine, artificial, transparent, or hollow, it’s there and I can’t escape it nor do I want to.

Enough of the metaphysics, how was the pizza?

I’ve always loved the cheese and veggie here.  That continues on this visit.  Keeping it simple is the theme of this post.  The cheese is essentially an extra cheese with delicious pizza sauce and that crust is masterful.  Throw on some onions, peppers, and other various vegetables and you got the latter slice, which also was stellar. 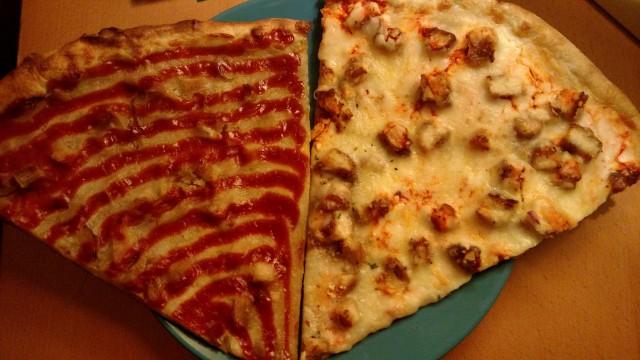 The breaded buffalo chicken was good but as great as it’s been in the past.  My only thought is the lack of buffalo sauce.  Otherwise this was good.  The barbecue chicken was not edible for me.  I’ve never liked that combination on a pizza but this was disappointing here.  3 out of 4 ain’t bad.

But why did I get 4?  Well I came in late enough that the owner was trying to get rid of as many slices as he could.  He messed up my order and basically gave me that barbecue chicken for free.  But I think he would have done so anyways.  He almost gave me the equivalent of a large pie to go but I wasn’t feeling greedy.  Hopefully those slices didn’t go in the trash as they tend do to at close of business hours.  And no, I’ve only had tiny portions of my slices, I may be able to get a total of four meals out of them.

The owner is funny.  He seems like a real Italian.  At least I want to believe that.  He isn’t friendly or standoffish.  But he has the look of a guy who works hard or maybe just carries himself like he does.  I wouldn’t expect him to recognize me but he always has this same snarky and dry sense of humor with me and his other customers.   Hopefully that’s his way of showing appreciation.  Otherwise I could see my people would be turned off.

Speaking of which, he did double charge me on my meal, so look at your bank statements after the fact.  This shouldn’t dissuade you from trying a slice.

Neither should the lack of atmosphere on the inside.  I’m all for ambiance but this is just a pizza after all.  Those beautiful distractions are eye-candy but the pizza has got to be yummy.  That’s a technical foodie term by the way.

If you like solid pies that are bigger than usual and a throwback to what an authentic no-nonsense pizzeria might feel like, this is right up your alley.  If you’re looking for something inspiring, you might get it outside, or maybe that’s just me.

One thought on “Four For The Fourth”