The Fells Point Festival is just one week away.  I find that so exciting and freaked out that time is just flying.

And As promised, the pizza theme of this neighborhood continues.  This visit brings us to a much more favorable spot, as opposed to last week, Alexander’s Tavern.

A month-and-a-half ago a huge group of us were out in the neighborhood for a dear friends birthday. Several stops were made but none were better than this location.

Our group of about 50 or so had taken over the entire front bar area.  And there was such a powerful and magnetic energy in the room.  My words alone will not do it justice.   The day was phenomenal.

And speaking of that, I saw a few friends eating a few appetizers and other foods to soak up the libations that were being procured throughout the afternoon.

To my pleasant surprise, a couple pals were eating pizza.  So I just had to jump on this opportunity while I was there. 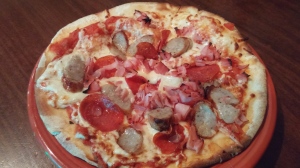 Now I’ve noshed here a multitude of times before and always enjoyed myself.   I forgot they served pizza and shame on me for that fact!   After making several inquiries to the friendly bartenders and perusing the menu, the unanimous suggestion was to order the 3 Little Pigs!  Mama Mia! 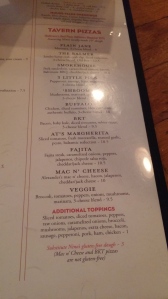 I had this in early August but the taste still resonates with me.  The crust was thin and just perfect.   On just a visual level it was almost too beautiful to eat.   One thing about me, I’ve never seeked out red meat on my pizza.  It’s just never been near the top of the list for me.   It’s not that I don’t love it.  I just prefer chicken, vegetables, seasonings, yummy sauce, and of course lots of cheese. 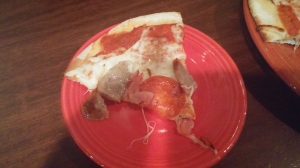 But this is something else.  The trios of ham, pepperoni, and sausage taste so fresh and so real.   For a second, I thought all this meat could clash and some flavor might be lost.  How wrong I was!  I also do love some ham so this was a treat. Just looking at the toppings I can tell this is real quality and a lot of effort was put into preparing this.  I took a few pieces off my mini slices and ate them individually and it was glorious.

The sauce and cheese were easy to taste even with all that meat piled on top.   My mouth is watering at the though of having one right now. 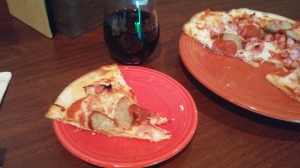 The presentation was inspiring as well. I found the plate that it came on to be very charming.  Whether the color was intentional or not, I don’t know.  But I do believe they do serve red plates and I find this detail to be an added bonus.  And it went perfect with my wine! 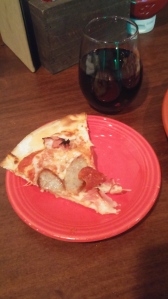 These are personal size pizzas and I would’ve devoured another one.  But I also found this too good not to share.  I passed around a few slices to the buds of our birthday crew, and the positive reviews were unanimous.  It was superlative city.   Being in a great mood also helps.   Everything just felt right about the day.  And the was pie is stupendous, sensational, and splendid.   It was so good that a little over-the-top alliteration was necessary.  And they’re only $6 on Thursdays!  That’s highway robbery!  This pizza is worth every penny and then some. 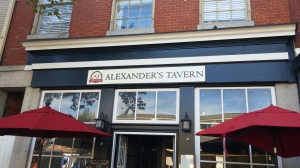 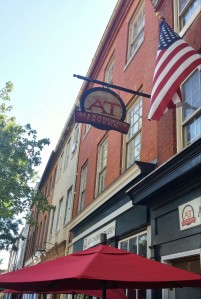 If you’re in the neighborhood or going to be headed to the festival next week, I strongly recommend stopping by for a pizza or anything for that matter.  I’ve always had a great experience here.  And I cannot wait to try some more of their creations.

Thank you so much.