The Fells Point Festival Version 2.0 is now only a week away.   And the pizza party has taken a detour and we are making some new moves!

This post is about what I ate last night.   Sounds like a normal thing to write about.  But this is what makes blogging so fun. The dining establishment I’m expounding on today was nowhere on my radar.  It was suggested by a couple of friends. And away we go.

Cockey’s was nowhere on my radar.  It was suggested to me by a couple of friends last night.  And in the context of where these posts are going, I feel like this was the perfect place to write about for today.   I took the inspirational several block walk from near the heart of the neighborhood to Upper Fells or Butchers Hill.   Since the website states Cockey’s Fells Point, I think I am ok.

I had only been here once before and really liked the atmosphere.  The interior is beautiful, the staff is friendly, there’s a nice outdoor dining area, and they have a good wine list.   The place has been open less than two years and a lot of the locals seems to enjoy it.

While going over the menu, I saw a lot of other meals I was interesting in getting.  But pizza is the name of the game, and I ordered the Ace Special.   I ordered this simply because the name stood out and I was in the mood for portabella mushrooms.

When they brought the pizza out, I noticed it was cut awkwardly.  If the pizza tastes good, I wouldn’t think anything of that. But, I sensed the way it was uneven has to do with how hard the crust was to eat in certain places.  Some of it felt a bit overcooked and I had a hard time biting into my mini slices.  The tiny cuts are always a nice touch by the way.  It just felt rough on my teeth at times.

The toppings were very good.  I liked the cheese, sauce, diced chicken, mushrooms, and red peppers.  This is a simple yet tremendous mix of cheese, protein, and vegetables.  I just wish the crust was cooked a bit more evenly.   It was a distraction.   It didn’t detract entirely from the pie, but I was more perplexed than anything.   My wine was very good and complemented the pizza well.

Nevertheless, I will come back again  I will gladly get another pie or maybe something else that looks like it could be scrumptious.   Since it’s a fairly new restaurant and so much work seems to have been put into it, I want this place to flourish. There is a charming feel and energy surrounding the whole place.    This has the look and feel of what Fells Point is really all about; cozy, quaint, and approachable. 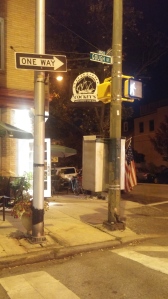 I look forward to coming back again.

2 thoughts on “Called An Audible”