Whether it’s the locals in town or folks on vacation, people have sung the praises of Trattoria Lombardi’s (or just Lombardi’s for short) in Ocean City, MD.

When I mentioned to my fellow pizza pals that I wanted to focus on pizzerias by the Maryland and Delaware Beaches, Lombardi’s was the top request and suggestion.

And the fact that it was during the holidays will be taken into consideration. 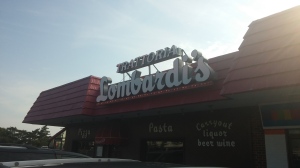 The interior is very authentic.  It’s an older restaurant and I like it that way.  There was really no chance to take photos inside, since it was such a sea of humanity. And what I would try to capture would be lost in the shuffle.  The place was packed and the lines to get a table or even to order food to go were growing by the minute.  There was such a frenzy and I wouldn’t expect anything less during such a hectic time of year.

I ordered three pies to go, for my friends and I to enjoy. 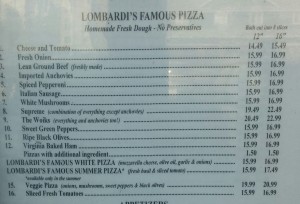 While scanning the menu I was pleased to see a special Summer Pizza.  Of course I had to satisfy my curiosity. 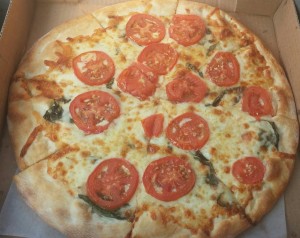 Unfortunately this was my least favorite.   The tomatoes and basil on the white pie really didn’t click for me.  It wasn’t bad.  It just didn’t come together how I had hoped.  The dough on all three were cooked very well.  It was the right about of crispness and softness at the same time.  The visuals are a delight.  I love how the  cheese looked so magnificent melted into the crust.    But for this one, maybe it was a rush job.  The tomatoes don’t need to be cooked all the way but it felt like they were thrown on at the last-minute. 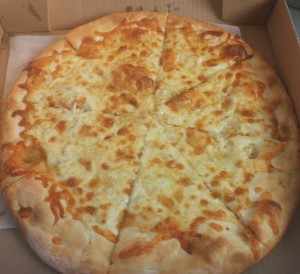 Next, we have the White Pizza.  I didn’t realize until I was eating it that it had onions.  I thought it was a mistake or a few onions had spilled over from another order by mistake.  It wasn’t until I looked at the menu that I saw this was their special version.  And I really liked this one.  I found this very tasty and love how the onion is a part of this pie.  If you look close you may be able to see them in this picture.  This was my favorite of the three. 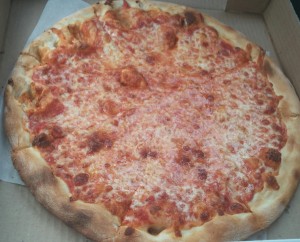 And finally, it’s the Cheese.   So many people have told me this is one of their favorite pizzas at the beach or anywhere in Maryland for that matter.  So I had high expectations.  They did not reach them.  I thought it was good but it didn’t turn out as great as I hoped.  I’m not sure what I was hoping for but this was a notch or two below that.

Nevertheless, my buds and I ate this pizza up over the next couple of days because it was very good.  And it tasted great reheated.  But I don’t think it’s quite the blow away pizza others have touted.

But as I previously stated, I understand this tasting fell on a holiday weekend, so I will definitely give it another go.  And I would eat here again anyways, either in-house or carry-out.  I found this to be a very good but not quite the amazing feast I felt would happen. 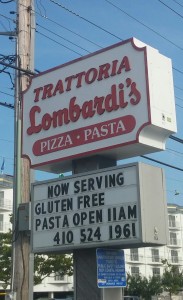 In a way I blame myself for such high expectations.   But I can’t way to go back on another day and have those same expectations.  I believe the hype! 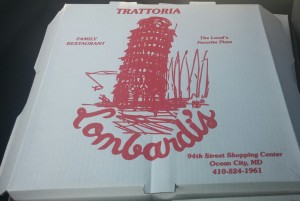 6 thoughts on “An Ocean City Favorite”