Ocean City, MD has always brought me found memories, from when I was a kid.   A lot has changed but a lot has remained the same.

There’s a lot more to do as an adult, in terms of bars, clubs, and restaurants.  But, this resort town prides itself on being a family destination, first and foremost.

I remember eating Pizzas Tugos when I was a kid and thinking it was the greatest pizza on earth.  Actually every pizzeria I ate at felt like the greatest thing in the world!

Either my taste buds have expanded or I just grew up.  Because these two slices I got were anything but the greatest.

How great and greasy does that appear?  Well it may look appealing to the late night delivery and pick-up crowd, but that still doesn’t make it any better.

I understand this is a small sample size, but it was still disappointing.   It was way too loaded with grease and fat.  Now or a night after the bars, that might be just fine.  But I can only imagine what you’d be feeling the next morning.

It was also very salty.  I do like how there was loads of cheese bleeding into the to go (tugo? hehe) box.   But the cheese was a big mound of salt and other problems.

The sauce tasted a bit funny too.   It just didn’t go with the cheese or the crust.  And the latter was a bit soggy.  I tried to eat what I could, but I had to give up. 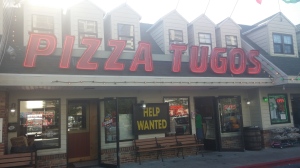 Some of the other problems included the service.  There was no line in front of me, and I waited a good 15 minutes for my order.   You would think with all that time passing, that my pizza would be either heated up just right or a bit lukewarm, or maybe a little of both.   No, this was scolding hot and not in a good way.   My tongue burned but fortunately I survived and didn’t need a fire extinguisher to save me.

In keeping up with trying to find positives, I do like that they have their own design paper for carry out, which you can see in the first picture above.  Other than that I don’t know.    Well, the pepperoni was ok.  I picked those off and ate those on its own.

Now when many of us are at the beach, or away on vacation, our goal is not necessarily to look for amazing, knock your socks off pizza.  But it should at least taste good.   This wasn’t the worst but I found it mediocre and boring.   I don’t see the point in coming back to visit anytime soon.

This shouldn’t sway you from not wanting to try them out.  You may love it.  I know a few who do. Here’s their menu.

Summer is in full swing, so more OC and Eastern Shore reviews will be forthcoming.    For a prior review from Memorial Day Weekend, click here.

One thought on “Tugo, or not Tugo”